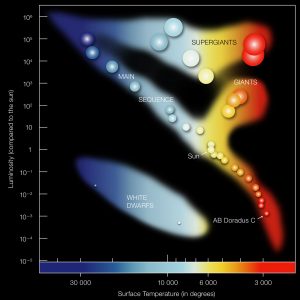 When a star initiates its hydrogen-burning phase, we say that it is entering the main sequence and is a true star—not a protostar, brown dwarf, nor a planet. The main sequence is a diagonal line plotted on the H-R diagram, which represent stars that are burning hydrogen, and fusing it into helium. The fusion process in the core releases heat and light, supporting the star against further gravitational collapse, and making it shine. Stars spend most of their life in one spot on the main sequence. Very massive stars live at the top of the main sequence, shining very blue and very bright, while low-mass stars are dim and red and live towards the bottom right. The sun is between these two extremes.

As we have seen mass is the key determinant of how a star lives and behaves. Astronomers use a simple unit, the solar mass, which is equal to the mass of our sun, to compare the size of stars. About 90 percent of the stars in the universe, including the sun, are main sequence stars. The table shows the initial mass of a protostar and the expected outcome.

Old stars include low mass main sequence stars that came into existence billions of years ago and also some high mass stars that will explode as supernova after existing for less than a million years. They include giants and supergiants. Most old stars lie outside the main sequence. They are old in the sense they are reaching end of life. For example, while Betelgeuse is about 8.8 million years old, and Pollux is 724 million years old, they are both “old”.

Regor is a blue subgiant that is leaving the main sequence. It has surface temperature of about 35 000°C and a solar mass of 30. It is in a close orbit with a binary partner, a Wolf-Rayet star. Barnard’s Star and Proxima Centauri are both cool red dwarfs on the main sequence. They are both flare stars. That is to say, they undergo a dramatic and sudden increase in brightness for a short period. Proxima Centauri is the nearest star to Earth after our sun.