Partner has opened the bidding with one of a suit, and here are a few example hands suitable for a raise. 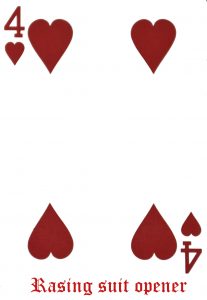 In majors with good five-card trump support you could double raise with as low as 7-10 points plus points for shortages, to bring the hand into the 10-12 range. If the communication is in minors it usually means responder denies a suitable four-card major in his hand. You can squeeze these points further with two five-carders. With the following hand responder has triple raised to Game:

This is a typical hand for a direct raise of opener’s 1♥ to 4♥ even over a one-level intervening bid. This is a shutout bid, and opener will pass. Responder has a total of 10 points (6 points plus distribution). The ♠ and ♦ singletons will provide valuable trump opportunities.
The next example is too weak for a direct Game bid:

This is a typical hand for a raise of opener’s 1♦ or 1♣ to 4♦ s or 4♣s, just below Game in the minor suits. This shows weakness. With another 3 points responder would have been able to go straight to Game. Opener may well do so if he has extra values. But remember we need to bid at the five level for Game in minors.

Note that when you are not sure, it is better to over-value your hand rather than to under value it. So when undecided between raising partner to 2 or 3, prefer the raise to 3.

Limit bids, in raising partner, give little away to the opposition, hence their valuable contribution to the Acol system.

If opener now jump rebids, i.e. one more than necessary, from 1 to 3 after your limit bid, he is inviting you to Game, but only if your limit bid was of maximum point value. If opener had bid at the 3 level in a new suit this would be a one round force (see Takeout: Takeout response)

In the next section the other option for a limit bid is No Trumps.

Game. A Game is a successful contract in 3NT, 4-Major, or 5-Minor.
Shutout bid. A shutout is a high bid intended to shut the opponents out of the auction.
Slam. A slam is a bid for 12 or 13 tricks.
Stopper. A stopper is the Ace, a King-Queen duo, or a Queen, Jack and 10 combination in a suit which prevents the opponents from running their long suit.

Rule No 6 – A No Trump bid promises a balanced hand, and nothing worse than a doubleton!
Rule No 7 – With insufficient points for Game don’t risk a contract by pushing partner to a 3-major or 4-minor bid. Stop bidding before it is too late.

To continuing reading go to: No trump response