Anagram flags are key words that suggest you need to look for an anagram of the word(s) or phrase that follows. They convey an instruction in the process of deciphering the code. If you just read through this list you will get a fairly good idea of these flags or “action” words: 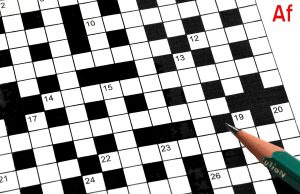 game, getting out of hand, going around, go walkabout, ground

off, order, ordered, out, outcome

tailor, taken up, tattered, tight (as in drunk), to be woven, to create, torn, train, trained, travelling, treatment, turns out

Note: “at sea” is an idiom meaning, all confused. “Pants” is UK slang for no good, useless, or nonsense (see example 4 below).

1] Hard up criminal in seclusion (6). Criminal is regularly found in cryptic clues indicating an anagram. In this case the answer is “purdah” from an anagram of HARDUP.

2] Got the better of untalked-of criminal (10). Just to prove criminal is often used! Anagram of UNTALKEDOF gives the answer “outflanked”.

3] US admit bombing sporting arena (7). Anagram (bombing) of USADMIT. The answer is “stadium”.

5] It makes hot water muddy grey around London area (6). Muddy is the anagram key of GREY. A London area would be SE (south-east). Thus GREYSE. The answer is “geyser”.

6] Man washing each woolly could be cleaner (7,7). Woolly is an anagram flag for MANWASHINGEACH. The cleaner is a “washing machine”.

7] Cycling Leeds roads will make you this! (6-4). The anagram flag is cycling. So the anagram is LEEDSROADS. The answer is “saddle-sore”.