The No Trump contract is the quickest way to make Game if you get the right fit between partners. 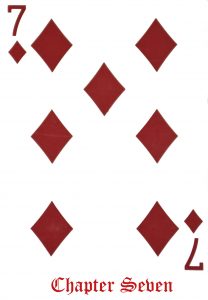 The bidding is very specific and within two rounds the combined points in a No Trump exchange are known precisely. If all goes well a 3NT contract is in the bag, and you require just nine tricks to make Game earning a tidy 100 points below the line. To see how easy it can be go to Chapter Eight, where we cover a few games in a no trump contract.

It can also be disastrous! We look at that too.

Stayman is probably the most frequently used convention in the no trump armoury, and this was covered in Chapter Six.

We are now going to delve deeper into the subject. For those of you just starting out you may want to skip this chapter and come back to it later.

For ease of reference a matrix of some of the conventions used in response to no trump opening bids can be found in the table at the end of this chapter. Summary of Conventions

Some of the conventions in this chapter are “transfer bids”, seeking a preferred fit in a major or a minor suit contract. Further, they seek to keep the 1NT opener as “declarer”. That is, he can keep his hand hidden while playing a suit contract. This has important strategic value.

The theory behind the Acol Conventions

Beyond the normal bidding sequences, a wide number of conventions are available with the intention of increasing the information flow between the partnership during competitive bidding. The fact that the convention is not “natural”, that it does not mean what it says, is immaterial. Thus, a conventional 2♣ response may not mean “I have a good club suit,” any more than “I’ll eat my hat,” means you will do just that. Rather it is a signal with a coded meaning, and as such is a convention.

Some conventions do not work together, so it is not the case of the more the merrier. Indeed, too many conventions will lead to confusion and misinformation. Conventions are strictly for partnership agreement—any or all may be used. Indeed, a player may play without using conventions at all, even though it is important to have knowledge of at least the most popular ones in order to understand what is going on between the opposition partnership.

Acol relies heavily on natural bidding. You value your hand with high card points, plus points for distribution, where appropriate, and bid and respond accordingly.

Most Acol conventions have been developed to escape dangerous no trump contracts. Check out most conventions and you will be sure to find a NT lurking about somewhere. A second point to make about Acol conventions is that they often use intermediate and otherwise pointless bids.

Take, for example, No Trumps. You need a 3NT contract to make Game by winning 9 tricks. For this you earn 100 points below the line. You earn a further 30 points for any extra trick you make, and these are scored above the line. If you are in a 4NT contract you have to make 10 tricks. If you succeed you will earn 130 points below the line for Game. However, you have made life hard for yourself. Why not stop at a 3NT contract instead of a 4NT? Either way you make Game and earn 130 points. But with a 4NT contract you have a greater chance of losing the contract and going down for penalties. The same holds for a 5NT contract—also useless in itself. You get just as many points with a 3NT contract plus two overtricks as you would with a 5NT contract, and in both cases if successful you make Game. The same can be said for a 5♠ or a 5♥ contract. They are all what I call intermediate bids that provide no “natural” advantage as a contract at that level.

Similarly, the lowly 2♣ and 2♦ are also useful for convention signals. Anyone who plays a contract at the two level in minors will only earn 40 points. You can get stuck with such a contract, that’s true, but you are just going through the motions. With 60 still to get for Game you are as likely to end up in 3NT or a 4♥ contract in a future round if things go your way, making the minor achievement exactly that: 3NT/4♥ gives you Game on their own.

So Acol uses these intermediate bids in its conventions. And you will find the bulk of Acol conventions use 2♣, 2♦ , even 3♣ and 3♦ , and 4NT as signals to steer the partnership away from being stuck in a No Trump contract.

When 4NT turns up in the bidding it is often—though not always—the Blackwood Convention asking for Aces.

To continue reading go to: Jacoby
Further pages in this chapter are:
Texas
Smolen
Weissberger
Sharples