Acol has a number of ways to show stronger opening hands. 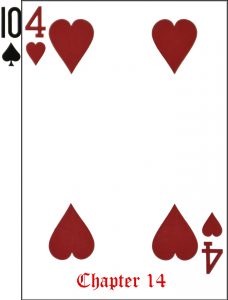 With 16+ points, opener must be considering Game early on in the bidding, even if his partner replies at the one level (showing 6-15 points). It is therefore important for opener to tell his partner he has a stronger hand than usual, and he can do this in several ways, all of which require a rebid by him to complete the picture.

With two biddable suits the normal rule is to open as follows:

In either case, an opening bid of one of a suit initially shows 13-19 points and at least a four-carder.

With 16-19 points, however, opener will want to show the stronger hand. With two biddable suits he can achieve this by “reverse bidding”, that is, by bidding his lower ranking suit first and his higher-ranking suit on the rebid. At the risk of creating confusion the reverse bid sequence is switched where both suits are black. So, remember, with ♠s and ♣s in a normal weaker hand (13+ points) you always bid ♣s first to keep the bidding at the lowest possible level. To indicate strength you reverse bid with the ♠s first.

Some players say you can only reverse suits that are of equal length (that would account for less than 30% of all hands dealt). And when they further add that reverse bidding can only operate with touching suits, it would surely leave few eligible holdings for the reverse bid. Besides, less than 26% of hands dealt carry 16 or more points.

In my opinion, any 5-5 combination (found in 4% of hands) should be reverse biddable to show 16+ points. With a 5-4 distribution you can take your pick. If your five-carder is a strong ♠ suit and the 4-carder is an also-ran ♦s I dare say you might ignore the minor. With a ♥/♣ 5-4 you might take the same approach. But if the minor suit was powerful? I would probably bid it first, and definitely if it was the five-carder.

It is worth reminding that the no trump on rebid to show 15+ points is not available to North simply for the fact his hand is unbalanced. See No trump rebid.

With a straightforward 5-5 holding and 16+ points reverse bid as follows:

The reverse bid is forcing for one round and usually shows more cards in the first bid suit than in the second suit. For example, with a ♠/♥ combination in the following hand, and to show his 16 points, opener reverse bids, first with his lower-ranking five-carder ♥s, then with his four-carder ♠s on the rebid. This shows he has five ♥s and four ♠s as well as his strength.

But what if he had the following hand?

A reverse bid here would be misleading. A normal bidding sequence for this 5-4 set up would be to open with 1♠ and then ♥ on the rebid at the next available level. If North gets a third opportunity to bid he returns to his ♠s. This is the normal way to show a 5-4 distribution. So how does he show 16+ points if ♠s is his longer suit? A reverse bid would either show 4-4 in the majors or 5-4 with ♥s as the longer suit. If he does not wish to mislead partner, the answer is to bid in the normal sequence, but to incorporate a jump bid on the second call. This jump bid will show 16-19 points, while at the same time indicate the correct number of ♠s and ♥s. Consider North’s bids:

As this uses up a lot of bidding space it is important to consider alternative methods in view of ones holding. It may be, for example, that after a round of bidding you are left with having to jump to game to show your 19 points, and this may be inconvenient. So what are the alternatives?

After opening one of a suit, a bid at the next level in No Trumps will also show a stronger balanced hand in the following way:

If partner had replied at the two level, then this table has to be slightly amended so that 2NT stands for the 1NT rebid, while 3NT covers the whole 17-19 spread.

It is worth noting that, in opening 4th in hand, North would be showing 16+ points anyway. On rebid therefore no trumps will show the following:

Note that a responder’s rebid of 3♣ in reply to opener’s rebid of 2NT is the Wolff Convention, which is discussed elsewhere.

If the hand is unbalanced then there is the jump rebid option. After opening one of a suit, a jump rebid of the same suit will also show a strong hand:

Note that to be a jump bid the call has to be one more than necessary. The jump bid in the same suit is a limit bid, that is, not forcing. It merely invites partner to bid Game if he thinks it is possible. To be forcing the jump bid would have to be in a new suit.

On the other hand, if the call is two more than necessary then 17-19 points are shown, for example, where North jumps straight to Game:

Reverse bid. A reverse bid is a rebid by opener in a suit higher in rank than his opening suit to show a stronger hand.

Rule No 21 – With a stronger hand opener must consider his rebid very carefully. If he gets off on the wrong foot partner will be confused and you will suffer a missed opportunity.