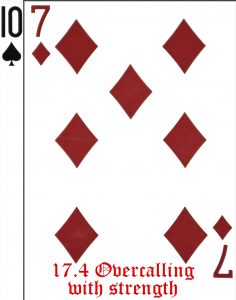 The opposition opens the bidding with 1♥. To show 16+ points. South in the overcall position needs to bid one more than necessary, 2♠ instead of 1♠. With his strong six-card suit and a singleton he is simply too strong to bid at the one level. Indeed, the key requirement for a jump overcall is a good six-card suit.

South’s 1NT overcall shows a balanced hand with 15-17 points and a stopper in the suit bid by East. Note that even those who play the weak no trump still use the strong no trump when in the overcall position. North will respond as if South’s overcall was the same as a strong no trump opener.

With even more points, South uses the double overcall:

The double overcall says nothing about South’s hearts  but shows a strong opening hand. He will takeout his partner’s response into spades on his rebid.

The next hand is also a powerful one but not suitable for the takeout double:

South has 19 points and stoppers in three suits. The overcall in opponent’s suit is the “Cue-bid overcall”. It is unconditionally Game-forcing (subject to partnership agreement). In responding North will show his suits in ascending order. The following is another good candidate for the cue bid overcall. With such a hand South will bid two of any suit bid by East:

South has 19 points. He just needs seven more from North to be at Game level. He will bid 4♠ over any response from partner. In the next example, South has a blockbuster 21 points and will target Game in 4♠s. Whatever suit East opens with, South will top it:

In the final example, East opens 1NT. With a strong hand of 17+ points South will struggle to show a good major suit. Fortunately, there is another Acol Conventional bid he can add to his armoury: the 2NT overcall over 1NT:

With 18 points and two good suits this is perfect for the Acol 2NT over the 1NT opener. The 2NT overcall is Game-forcing and indicates a very strong two-suiter.  North must respond to show his best suit in ascending order. The bidding will continue back and forth until the partnership finds the best fit of the available ♠ and ♣ suits. See: Acol 2NT convention.

North opens one of a suit and South holds a strong hand. He has two strong suits and 16 points:

North’s opening of 1♦ shows a four-card suit and 13-19 points. South’s first response is a takeout at the one level. It shows 6-15 points and a four-card spade suit. Obviously, he has a lot more to tell and knows he will have the opportunity to do so because North’s opening bid promises a rebid. And indeed he does rebid with 1NT. This shows North has a balanced hand and 15-16 points. Even on minimum South immediately knows they have a combined 31 points, enough for Game in any suit or no trumps. South jump bids to 3♣, firstly to show his second suit and secondly to show 16 points.

This three-level bid in a new suit is one-round forcing. Whatever happens next the partnership must end up in a Game contract.

So what will North do? So far they have mentioned three suits. If North has a stopper in ♥s he might well opt for the cheapest Game at 3NT. Remember, he has shown a balanced hand by his second bid. Then again he could raise partner to 3♠, or to 4♣ to invite Game in the suggested suit. Either way South will raise to Game and keep his hand hidden, playing North as dummy.

Rule No 24 – When first response from partner is a jump shift you must take this as a one round force and make another bid.