Rebids by responder range from a “sign off” with 6-9 points, a raise or takeout at the next level with 10-12 points, to more ambitious offerings to show 13-15 points. 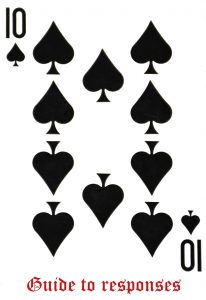 Above this remember that he will already have signalled this with his first response to an opening bid—a jump takeout.

On his rebid responder will pass unless he is required to show preference:

Here are some examples of weak rebids by responder showing 6-9 points:

South has to choose between ♥s and ♦s. With the above hand he responds 2♥s on his rebid. His “preference” bid does not constitute a raise nor does it show additional values.

If South instead had only two hearts, but three diamonds then ♦s would be the preferred suit and he would pass, leaving the partnership in a 2♦ contract. If South had five spades and, say, doubletons in hearts and diamonds he might well bid 2♠ on his second response to show his long suit as a negative preference.

In the next hand, South has a long, if weak spade holding:

The following three bidding sequences show South is only ‘correcting’ the proposed partnership contract. Note that a preference bid and a correcting bid can agree a partner’s suit with as few as two-card support:

With stronger hands South will not pass.

South’s No Trump bid indicates a stop in the unmentioned suit (♦s) and a specific point count. In this case 2NT shows 10-12 points. Incidentally 3NT would have shown 13-15 points.

South shows his longest suit first, and then jumps to a ♠ raise to show 10-12 points.

With 13-15 points South first bids a 1♠ takeout as a Delayed Game Raise. North repeats his suit as he has a five-carder. South takes him to Game in hearts.

1] If North raises his suit on the rebid to the next available level, South will respond as follows:

2] If North bids a new suit on his rebid at the  minimum level:

3] If North bids 1NT on his rebid following a suit opener, this shows 15-16 points. If he reverse bids two suits this shows opener has 16-19 points. The rebid by responder is fairly straight forward.
4] If opener bids 2NT on his rebid this is the Wolff Convention (see below).
5] If opener makes a jump shift continue bidding until Game is reached.

To continue reading go to: Forcing response
By Nigel Benetton – based on the UK Acol Bridge Bidding System