An opening bid of 2NT shows 20-22 points, a balanced hand and a stop in all four suits. 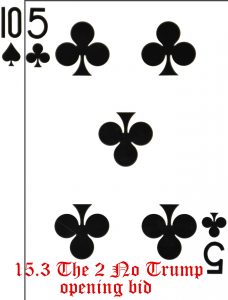 The bid cannot be used in the overcall position; and, like the 1NT opener, it is a limit bid, so it is not forcing in any way. Nor does it promise a positive rebid.

If you have an unbalanced hand, you might consider a 2♣ opener, even with less than the usual 23+ points. With borderline cases you can probably fish around for distributional points to make an unbalanced hand worth 23 points anyway.

Although it is below the 23+ threshold, opener has an additional value in terms of five Quick Tricks. Against a probable 2♦ negative response North will rebid 2♥.

The cue bid is a very useful convention for exploring slam possibilities while keeping the bidding at the lowest possible level. You recognise a cue bid under the following two conditions:

In each case the cue bid indicates first round control (that is, an Ace or void) in the suit bid, and requests partner to show the same, lowest ranking suit first.

In this way cue bids are intended to find controls in side suits so that the partnership can figure out if they can bid up to a slam contract.

In the first example, North invokes the cue bid as a good way to investigate a slam:

North has a massive 22 points, a seven-carder and a useful void. After the following sequence how do you go for a slam? Using Blackwood would only discover how many Aces there were, but not necessarily in which suits. In this case it would matter, because if South has only one Ace and it were the A♥ it would be of no value, whereas the A♦ would be worth its weight in gold. The answer is to go “cue bidding”:

A grand slam could be based on South holding an A♦ and K♣ or even a singleton ♣. So to South’s 3♠ response North cue bids 4♣, firstly to show he has the A♣, and secondly to ask South which Aces he has. The response is in ascending order: a suit missed is a suit missing the Ace and/or King.

His reply would indicate the following:

Let’s say South replies with a bid of 4♥. North knows his partnership holds three of the aces. Encouraged, opener then cue bids 5♣ to say, OK fine, what else?

Usually, fourth-level bidding is used to show Aces, and the 5-levels showing Kings. So, when the trump suit has been agreed and either a Game contract has been reached or a Game-going situation exists, any bid in a new suit is a cue bid showing first round control in that suit (Ace or void), and later second round controls (guarded King or a singleton). Consider this sequence:

North’s second rebid with 4♣ is the first cue bid, indicated by the fact the partnership has agreed ♠s, and telling South he has the A♣. The 4♦ reply from South says has the A♦, and North’s 4♥ rebid says he has A♥. Thus the partnership has first round control in three suits: ♣, ♦, and ♥.

South’s 5♥ bid shows second round control with the K♥. In missing out ♣s and ♦s, he shows Kings are missing from his hand for both those suits.

With the next bidding sequence, North has opened 2♣ and, following the same exchange of bids, again cue bids with 4♣s:

With his 4♥ reply South denies holding the A♦. North’s 5♣, however, does not deny the A♣, because this was already established as the trump suit. If he did not have the A♣ he would likely have bid direct in Blackwood to check on South. In any event it is not important for South to see a clear picture; rather North is in the driving seat. The fact that he goes 5♣ to show K♣ indicates he is happy about Aces and is therefore proceeding with his slam investigation.

Grand slam. A grand slam is a contract to make all thirteen tricks.

Guarded King. A guarded King is an honour that is protected by another card in the same suit so that when the Ace is played by the opponents the King can be held back and become a control in that suit.

Playing tricks. Playing tricks are defined as the number of winning tricks expected, with no help from partner, given that the longest suit is trumps. It is used to assess the trick-taking power of a very long suit (seven cards or more).

Rule No 22 – With powerful hands of 20+ points you must open at the two level and force partner to respond (a one round force).