The Two Club opening bid is the strongest bid you can make. It shows 23+ high card points, and a promise to rebid with more information: r 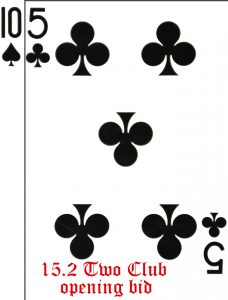 ebid with No Trumps to show a good balanced hand, or bid a suit at the next available level in search of a fit with a Game-going hand that has five quick tricks.

Quick tricks are tricks that can be made straight away, that is, “right off the top”. Quick Tricks are only considered for very big hands.

No suit can contain more than two quick tricks.

The point spread of the 2♣ hand is defined on opener’s rebid as follows:

Examples of a Two Club opener

With 23 points North opens 2♣. He will then show his spades on rebid:

With 21 points and 5½ Quick Tricks, North can afford a 2♣ opening bid. Following South’s negative 2♦ he will show his long heart suit. On South’s second negative (2NT meaning 0-2 points) North will rebid to end up in a major or No Trump Game:

Tricky hand here because he does not have enough points to open 2♣, yet clubs happen to be his suit.

With two A-K-Q combinations he can count on six Playing Tricks. So he is correct to open 2♣. As often is the case partner has few points. The 2♦ negative response shows 0-6 points and North rebids with 3♣. This tells his partner that clubs really was his suit, probably a six-carder, and that he has less than the usual 23 points. The partnership will know that slam is not in the offing.

A rare 27-point hand requiring a 2♣ opening bid, no questions asked. North will want to look for the other Aces. His 3♠ jump shift asks South to cue bid his Ace.

A response of 4♠ or 4♦ would show South holds an Ace in that suit, and either way North will bid 6NT. With no Ace South bids the 3NT negative response, and North will Pass, leaving the partnership in a quick Game contract in no trumps.

Back to Top
To continue reading go to: The 2NT opening bid
By Nigel Benetton – based on the UK Acol Bridge Bidding System