I have published two full-length Science Fiction novels: Red Moon Burning and The Wild Sands of Rotar. Both are available on Amazon Kindle for worldwide distribution. Click on their covers for a preview of the books.

Who can you trust? 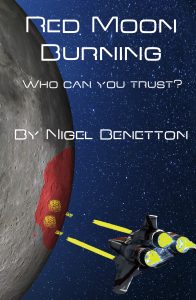 Chief Rehab scientist, Daniel Ellerton, is plunged into a nightmare race against time to prevent a terrifying virus from escaping into the general population. When several of his desert monitoring stations are sabotaged, he reactivates his Special Services division to investigate.

Ellerton’s resources are stretched to the limit as he faces a string of assassinations and the murder of a high-level secretary. As if that were not enough international tensions reach breaking point and war is declared.

Meanwhile, investigators trace the source of mysterious transmissions to Host, the biggest man-made space station in history, and where there are more unexplained deaths. Chief Administrator Franklyn Cornwallis is giving nothing away. So who is the real enemy, and who is he really working for?

Not far away, in her sprawling palace on moon base Kado the Tircon Queen Nergal remains taunted by her view of Earth. It has been over three hundred years since the failed invasion, and the alien settlers in their vast labyrinth of underground cities are getting restless. Earth troubles could be the opportunity she had been looking for…

The Wild Sands of Rotar

Nature is not the enemy. 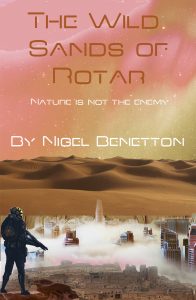 When Garth Orloch’s brother-in-law is framed for murder and sent out into the desert to die, he begins a personal journey in search of the truth. So who is the real enemy?

The desert city of Rotar, steeped in corruption and greed,  becomes embroiled in political infighting and administrative incompetence. Orloch becomes the unwitting ally of a ruthless businessman as Elmar Deevon plots his rise to power, promising a new economic order and relief for the poor. Only war and a natural disaster can stop him.