The Blackwood Convention is used to avoid going into slam by mistake. 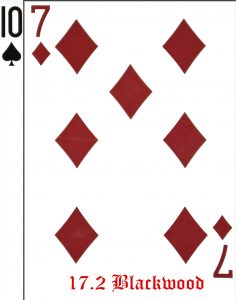 The reply to the Blackwood 4NT request for aces is as follows:

If all goes well, a 5NT request goes out to ask for Kings:

To understand the 4NT bid as conventional, rather than natural, is sometimes difficult. It is unquestionably conventional when the trump suit has already been agreed:

South’s second response is Blackwood asking for aces. North has two (5♥s). If the Blackwood bidder wishes to play in 5NT, he bids the next suit above his partner’s first reply (in this case spades over hearts). So South bids 5♠, which North had mentioned in the second round of bidding. And North has obligingly put him into a 5NT contract.

With the next hand it is North who has invoked Blackwood: 4NT asking for aces, then 5NT on the final bid asking for kings:

After the second request responder may choose to jump straight to slam without further ado on the following card holding:

North shows 13-19 points and a minimum of four spades with his 1♠ opening bid. South’s jump shift to 3♣s shows 16+ points and a minimum of four cards in clubs. So far so good. North’s rebid at 3♠ shows he has five cards in spades and also 16+ points. With a combined minimum of 32 they are now slam going. The only question is which contract? South’s rebid of 4♠ is forcing and North bids 4NT to ask for aces. South replies 5♥ to tell opener he has two. North then asks for kings (5NT). With a powerful 7-carder, South ignores the question and leaps into Grand Slam in his club suit.

When to use blackwood

Finally, with intervention, despite the partnership having agreed trumps, the 4NT call cannot be construed as Blackwood.

After this 5♥ interference, North will bid as follows:

Back to Top
To continue reading go to: Other conventions
By Nigel Benetton – based on the UK Acol Bridge Bidding System