Without trump support and no biddable suit responder’s only option is to bid No trump (or pass with less than 6 points). Like the simple raise the no trump response is a Limit Bid. 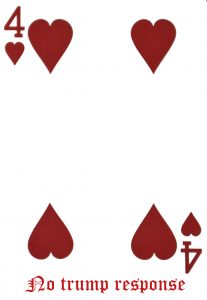 It indicates a very specific point holding and, more importantly, a balanced hand: nothing worse than a doubleton! Required distribution (for both opener and responder, if they are to agree a NT contract) will be: 4-3-3-3 (ideally), or 4-4-3-2. Some players will push an NT offering with a hand of 5-3-3-2, but I normally try and avoid this.

There is no value in long or short suits, of course. A straight honour count determines the following bids:

The point variation for 1NT reply exists because, progressively, more points are required for a minor suit game, one more for a ♦ , two more for a ♣ game. In both cases 5 of a minor is needed for Game against only 4 for a major Game. The NT response does not necessarily deny minor trump support, NT being preferred where the partnership has maximum points and wishes to bid at the cheapest level. The No Trump response, as with the No Trump opener, does not promise a rebid because there is nothing more to add.

But, if pressed to bid again, responder might agree with three-card trump support, providing the partnership is sure any short suit is covered.

Note that if there is an intervening bid, a No Trump response must promise a stop in that suit. In bidding over an intervening bid the points also need some adjustment because it might affect the levels. For example, over a 1♥ intervention, 1NT would mean 6-9 points, as normal, and a stop in hearts. A stop would be a King, or Queen, that could win a heart tick and take control of play. Over a 2♣ intervention, 2NT would also mean 6-9 points because it would be at the same level. Again the bid also promises a stop in clubs.

If responder does not hold a stop in the intervening suit, with no more than 9 points he should probably Pass. He would show his weakness with a NT overcall, but he would mislead his partner as to where his suit strength lay.

For example, North opens 1♥ and the opposition overcalls with 1♠:

South shows 6-9 points with his 1NT response, and no worse than a doubleton, probably in ♥s in this instance. His bid also promises a stop in East’s ♠s.

In the next example, South also shows 6-9 points, even though he bid 2NT instead of 1NT because of the intervening bid. He responds at the cheapest level. He has no worse than a doubleton and a stop in West’s ♣s.

More about responding with stronger hands can be found in Chapter Seventeen.