With a biddable suit South will go for the takeout. North opens with 1♥. South looks at his hand and sees he has enough points to bid, but he only has three cards in partner’s suit. This is not enough to support trumps in the first round of bidding. 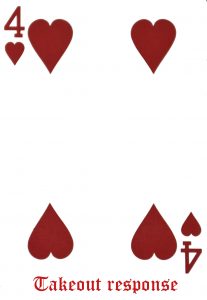 With a biddable suit South will go for the takeout. This will indicate to partner that he is neither suitable for a direct raise nor a no trump.

With minimum points (6 – 8) response must be kept to the one level. For example, 1♥ – 1♠. This tells North he has four spades, no more than three hearts and the minimum count of six points. He could have as much as 15 points, which would be revealed if responder has the opportunity to bid a second time.

The reason for this is simply that the first round of bidding is showing minimum points: 13 points from North, 6 from South. Between them they will not have more than a combined count of 20 points, so that a claim they will win one more trick than the opposition is pretty marginal. Only a second round of bidding will show more accurate values.

A basic response of 2♦ to a major will show 9-15 points and five ♦ s—unless the suit is supported by extra values. A takeout in a major, 1♠ – 2♥s will show four or more ♥s. To rebid his suit a second time he will certainly need at least five cards in ♥s.

South’s takeout is forcing for one round. So even with minimum values he is protected because North has already promised a rebid.

With two 5-carders South will bid the higher ranking first, otherwise he bids his longest. With two 4-carders he should bid the cheapest first (keeping to the one level). For example, with four cards each in spades and diamonds, South bids spades, 1♥ – 1♠.

In the following hand South has a balanced hand with 14 points. He would probably like to be in NT but of course this would not be a good idea if the fit was wrong and North had a long suit.

If North opens 1♦ South can show his four-carder at the one level and bid 1♥. This is a normal takeout.

But if North opens with 1♠ all South knows is that North has four cards in that suit. But South cannot support him: he only has three spades. Nor can he show his hearts because he needs five cards in that suit to takeout at the two level. A 1NT negative bid would show only 6-9 points, but he has 14. So what does he do? The answer here is to bid at the lowest possible level with 2♣s. This says nothing about his clubs but is a “waiting bid” to see what North does next. South will hope to show his ♥ suit next time round if he gets the opportunity. If North bids 2♦s South might well respond with 2NT because his ♦s (weak in a NT hand) are now protected by North. If he rebid at 2♥s North would know he only had four cards in hearts (since he did not mention them first time round). Either way North is left to decide on the final contract.

In this next hand South has 13 points. North opened with 1♠, and South replies 2♣s.

South is not strong enough for a Direct Game Raise, which in any event is best on long weak hands. The 2♣ is a “Delayed Game Raise”, again to wait and see what North is going to say next. North rebids with 2♠ indicating he has five cards in spades. The partnership has nine. South has good support and goes for 4♠—a jump rebid.

For the final page in the chapter go to: Conventions