Once defence has led to the first trick the dummy hand is placed face up. Declarer can now see 26 cards. This is the only chance to set up a profitable strategy.

Declarer has it easy since he can plan his play between both hands: his and the dummy’s. 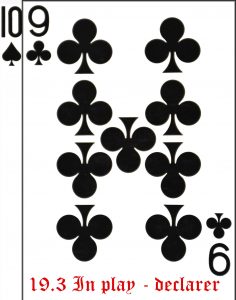 Defenders, of course, cannot see each other’s hands, so must rely on good communication to figure out where their cards lie. This is key to setting up a good defence, as we have already discussed.

Declarer will count his winners and his losers and seek ways to develop any extra tricks to make the contract. Generally, you count your winners in a no trump contract, and you count your losers in a suit contract.

The general rule is to examine both hands, yours and the dummy’s, and see has more cards in a given suit. Then you begin with the high cards in the hand which is the shorter.

So first of all, how many tricks can you definitely make for a no-trump contract?

Compare the two hands, yours and the dummy’s. Any ace is a winner. A king is a winner if you also hold the ace in that suit, or if it is protected by another card so you can duck opponent’s ace. The following is a rough guide for counting top tricks:

The holding refers to cards held across both your own hand and dummy’s. Any other honour holding, such as K Q 8 6, or K J 8, cannot be trusted to produce any trick without correct communication between your hands. You could see these as your second level distributions where you need to develop tricks. For example, a K 7 3 in dummy is unlikely to produce a trick. Team it up with even a doubleton, A 5, in your hand and you will make not one but two tricks if you set up your leads properly.

Avoid drawing trumps if the dummy is short in a side suit. Without a trump card dummy will be unable to ruff when the side suit is voided. Suppose dummy has a doubleton in spades, and hearts are trumps. After two rounds of spades you will be able to use the dummy to trump any future spade leads.

Avoid leading trumps if it deprives dummy of a top honour trump that may otherwise be used later as an entry. An entry allows dummy to lead to the next trick, which you will want to do during the course of play.

And this leads on to the third reason when not to draw trumps: when they will be needed for communication between the two hands.

As for the other suits, play the honours from the shorter holdings first. For example, if dummy has K J 7 and you hold A 10 6 5, play the King and Jack from dummy first, holding your ace for the third round.

Another good practice is to cash your outside winners so you can embark on the cross ruff. The cross ruff will afford you twice as many tricks than if you drew trumps first. The plan here is to exhaust a short side suit, say, in dummy, then lead to that suit from your hand so that dummy can take the trick with a trump. If you can void a suit in your hand too, so much the better. You can trump dummy’s lead in his suit. The cross ruff can be a very powerful weapon.

Back to Top
To continue reading go to: Squeeze and finesse