The squeeze can give declarer an edge in a tight spot. This section also covers: the finesse, the entry, unblocking, ducking and establishing a suit.

The following is a reasonable principle, arithmetically, but not always correct: 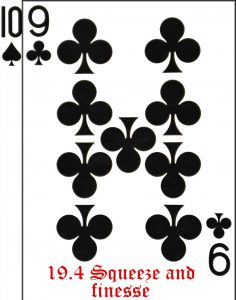 If you find you are weak in two suits, go for the squeeze. The idea is to win an extra trick by squeezing the opponent(s) into discarding a winning card, or unguard a potential winner.

It takes place towards the end of the game when, say, three or four tricks are still to be played, and declarer is looking for an extra trick. Several things have to be in place for it to work and, what’s more, you as declarer need to know where all the remaining cards are. Most players will have reached void status in one of more suits by now, so they have to start discarding. Let’s suppose the following hands are left to play:

On the face of it East could win two of the three tricks. South has the lead (fortunately) and so launches with the ♣9. This is the squeeze play because East is going to be forced to discard a guard or a winning card. He discards the ♥Q, exposing the king. South now leads the ♥8 to dummy’s ace to win the second trick as East has to follow suit with his now dead ♥K. The last trick goes to East with his remaining ♦A. This is the squeeze play at its simplest. I would imagine good players may not even recognise a squeeze play even though they have from time to time intuitively conducted one.

In any event this is for advanced players and I just mention it for your own information. The squeeze is most commonly used in no trump play. Actually it is rarely encountered when playing trumps and is difficult to set up.

The finesse is one of the most important tools in your play strategy. It is a means of winning a trick with a card that is not the highest available.

In this example, it is North’s turn to lead, and he does so with the 6♠. East must now decide whether to play his 2 or his king. If he plays the king he risks losing the trick if South has the ace. On the other hand, if his partner has the ace, then all will be well. But he does not know where the ace is. When in doubt the rule is “second player plays low, third plays high.” East puts down the ♠2. Yippee! South plays the Queen. By the bidding he may guess who has the king, but he is not sure, so he tries the finesse. And it worked because all West can do is play the ♠4. In this way South has finessed the ♠K. He can now take a second trick with his ♠A.

A card that wins the trick is called an “entry”. When you play a contract (as declarer) you need at least one entry in both your own hand and your dummy. After the player to your left has led to the first trick you turn the dummy cards face up and arrange them in order. Now is the time to consider your strategy—before following the lead. You need to count your winners or losers and look for opportunities to make up any shortfall in your contract. By ensuring the correct communication between your hand and your dummy you can control the lead into each trick. So earmark both entries into your dummy and entries into your hand and figure out the way you will switch between the two.

If you get this communication wrong you will end up with a train smash.

Through lack of planning your communication between hand and dummy can lose you tricks. If, for example, dummy lacks an entry you will be unable to transfer the lead across the table.

You may need to unblock a suit by deliberately playing a high card from your hand and lose the trick, thus establishing a future entry in that suit in dummy.

Ducking play is another technique to control future entries between the dummy and declarer’s hands. What you do is deliberately hold back a top card and lose the trick. Say you keep the ♠A back when you know the opposition has the ♠K. This means you keep control of spades for later, when you can play it on your own terms.

Establishing a suit describes the process of transforming losing cards into winners by capturing or forcing out higher cards held by opponents. This works really well if you have a long suit, for example, sitting opposite a doubleton. Once the suit is established all of the remaining cards are potential winners. You just need to exhaust any outstanding trumps before leading to your long-suited hand and running with it. It can be really fun to win a trick with, say, the last remaining club, a ♣2s.

Back to Top
To continue reading go to: In play -strategy
By Nigel Benetton – based on the UK Acol Bridge Bidding System