After an opening bid, there are some useful conventions for the player in the overcall position. 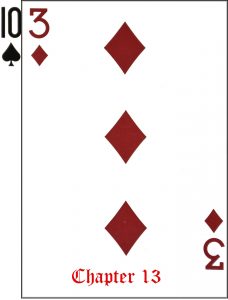 The “Unusual No Trump” is a jump bid in No Trumps over an opening bid of one of a suit. It is “unusual” since it does not promise a balanced hand; indeed, it promises precisely the opposite. The bid shows length in the two lowest of the unbid suits with a 5-5 distribution. The hand will either be weak on 0-9 points or strong on 16+ points. See the section on “Strength” for hands with an intermediate point count.

This overcall is unusual in that it denies a balanced hand and is looking for a suit-fit. It may even be called when holding a void.

With the Unusual NT overcalls East is asking partner to bid the best of the two lowest unbid suits. If South happens to intervene, then partner is not obliged to reply. Note that 1NT overcall by a passed hand would also be taken as unusual.

This is the counterpart to the Unusual NT. This time it is showing length in the two highest of the unbid suits. Again it shows 5-5 distribution, or possibly 5-4 in the two suits and the same point ranges as the Unusual NT. The bid is an overcall in opponent’s suit and asks partner to reply with his longest suit.

In each case, West will support with any 3-carder, preferably a major.

Unfortunately, the Unusual NT and Michaels Cue Bid only cover eight of the possible 12-card combinations:

In such situations, players might ignore the minor suits and bid as if holding one five-carder. They may be able to improve the description of their hand if they manage a rebid.

There is, however, a convention that you could use to fill the gaps. But it does alter some of the bid patterns in the two-well known conventions and it is really for partnership agreement.

It is called Ghestem and uses 3♣ in the overcall position. While diving straight into the three-level may seem a problem, when used with the Unusual No Trump and Michaels Cue Bid conventions you can describe your hand completely with just one bid.

Acol players do not normally make two-suited overcalls with hands of intermediate strength. So with 10-15 points overcall with the higher-ranking suit first and then disclose the second suit on the rebid.

With a 5-5 distribution the following high card points determine the type of hand:

The two–suited overcall conventions are used for hands that are either weak or strong.

Back to Top
To continue reading go to: Astro
Further pages in this chapter are:
Takeout double
Acol 2NT convention
By Nigel Benetton – based on the UK Acol Bridge Bidding System