It is not surprising we sometimes battle with spelling errors. What is one to make of these two words for example, correctly spelt in English: “offered” and “preferred”? There seems to be no logic. Both can be traced back to the Latin ferre meaning “to bear”. One would have thought “offerred” and “preferred” would be the logical outcomes (double “R” surely). I don’t know who created the rule or why but evidently, if the word ends in a short vowel, then the final consonant is not usually doubled. In “prefer” the last syllable is long, which is why the final consonant is doubled. So what? You might ask. Me too. But there it is. The only way to spell these correctly is to consign to memory. 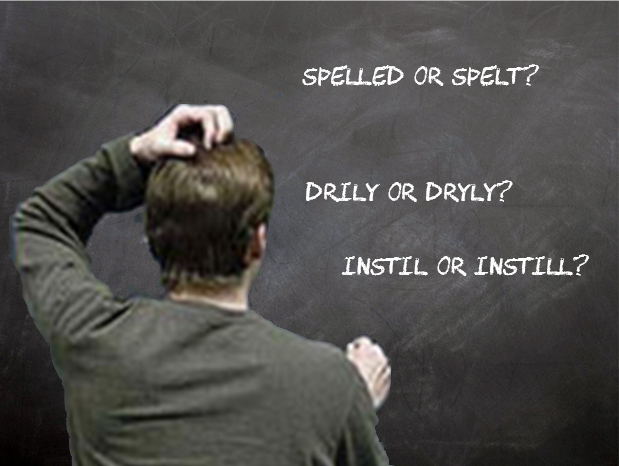 Another mystery in English spelling concerns the words “believe” and “receive”. They both come from Middle English, bileven and receven respectively. So who changed the spellings and why? Beleve and receve would make a lot of sense.

So again we are left with another rule, created for us after the fact: “i” before “e” except after “c” – if it has an “ee” sound.

Here is a list of commonly misspelt words. At the end of this section are a few alternative spellings (both correct), proving that even the most erudite scholars cannot agree.

This is a short list I have put together of the correct spellings of words/phrases I have often seen misspelt. You can always cut and paste this list if you want, and maybe add to it.

Another source of understandable confusion in English spelling concerns the use of double letters. Is it a double “b” or a single “b”? Is it two “L’s” or one? Here is a list of the correct spellings of words where surprisingly often the double letter is wrongly used or omitted. I have seen batallion, beggining, and equillibrium, for example. In all fairness, it is easy to get a little confused with English spelling! Here is my list. Again, feel free to cut and paste it and add your own words as a reminder.

Just a few notes before we dive in, that may help explain why some words are spelt the way they are:

When there is a choice of spelling, such as “drily” or “dryly”, it is your choice. But, can I suggest, once you have decided, to keep to your preferred spelling throughout your work. If you use an exclusion dictionary in your word processor you can add the rejected alternative spelling to it so that it is flagged as a misspelling. So let’s start with this one:

These are adverbial variants of the word “dry” from Old English dryge (spelt with a “Y”). So you could argue that “dryly” is what you should go for. It means: in a dry manner; in a matter-of-fact or ironically humorous way. Chambers and Websters say “drily” is a variant; Oxford says “dryly” is the variant, so take your pick.

Again, either is correct. The entry header for Chambers is “instil” (the English Spelling). It means: to drop in, to infuse slowly into the mind. Webster’s offers “instill”, or “instil”, inferring the former is preferred. As is always the case, once you decide, stick with the same convention for all your writing. I prefer instill, firstly because the present participle and past participle are only spelt one way: “instilling”, and “instilled”. In any case, the word, instill, derives from the Latin in (into) and stillare (to drop). Also note the old French, distiller.

Essentially there is no difference between these two prepositions. Use either. Sources suggest that “toward” is preferred in the US and Canada and is the older form. “Towards” is more often found in English outside of North America. The Cambridge dictionary says “towards” is much more common (ie in British English).

“Till” and “until” are generally interchangeable. However, some dictionaries, for example, The New Collins Concise English Dictionary, notes that while “till” is a variant of “until” and is accepted at all levels of language, “until” is preferred at the beginning of a sentence in formal writing. Personally I’d go for “until” all the way. I think “Wait until I come” sounds and reads better than, “Wait till l come.”

Until is the correct spelling—no question. The word derives from middle English un, and til (both from old Norse: und meaning “as far as”, and til meaning “to”). Incidentally, til is also of German origin.

Note that the word “Til” is also considered a spelling error. You will not find it in any dictionary.