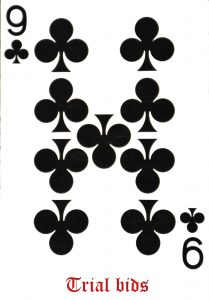 It chiefly considers the majors and follows a limit raise to the two level.

In a natural sequence the bidding might go as follows:

Instead North can use the “Trial Bid” to find out more:

So instead of the natural 3♥ rebid North replaces it with 3♣ as a rebid to ask  partner for assistance in that side suit. The trial bid shows North is a little too strong to pass, but too weak to push to Game without some support in clubs. Regardless of where his values lie South responds as follows:

In another example the 3♥ is the trial bid:

In the next example the 2♥ on rebid is the trial bid. Following the minor sequence, 1♦ – 2♦ it indicates a stop in ♥s. North is seeking a Game contract in NT, and is therefore asking partner for help, not in the trial suit bid, but in any of the other suits. Here, South obliges by showing ♠s.

In the final example South cannot help, and bids 3♦ . It is a repeat of the agreed suit as a negative response. Here the trial bid has helped the partnership avoid a dangerous contract in No trumps

North’s trial bid of 3♦ shows he is weak in his ♦ side-suit and needs help if they are to reach a Game contract.

In this next hand North’s 2♠ is the cheapest trial bid he can make; although he is looking for the ♦A. However, an ♠A might give him Game strength with second round roughing values already held in his ♥ suit.

Finally, trial bids in the minors are used to explore a 3NT possibility when a minor Game seems unlikely.

Again 2♠ is the cheapest suit for a trial bid, though it is not North’s only weakness. However, if South has a partial stop in ♠s, North can see 3NT. Being in the minors, South will bid any suit in which he has a stop, not necessarily the one North has called.

You may at first be confused between cue bids and trial bids. In most cases they both follow a raise of opener’s suit: a trial bid follows a single raise; a cue bid follows a double raise:

Cue bids are distinguished from trial bids in that they operate when the opening bid has been raised to the three level, or when the trump suit has been agreed upon by inference and a slam is looking promising. The cue bid shows first round control in the lowest ranking suit held (an Ace or a void), and asks partner to cue-bid his lowest-ranked control in reply.

The trial bid does not deal with controls. It follows a limit raise to two of a suit, and investigates a Game possibility, not a slam. And it usually concerns the major suits.

Control. The ability to win the first or second trick in a suit. The context is usually used in slam bidding. First round control is an Ace or a void; second round control is a King or a singleton [See Chapter Fifteen]

Small slam. A small slam is a contract to make twelve of the thirteen tricks. It is also known as a “Little Slam”.

Trial bid. A trial bid is signalled by a limit raise to the two level. It is used to investigate Game possibilities, primarily in the major suits.

Rule No 14 – Opening one of a suit promises a rebid, even if his partner does not bid.
Rule No 15 – A no trump response from partner indicates no biddable suit.
Rule No 16 – After any no trump limit bid opener is no longer obliged to rebid.