In this final section of Chapter Four we look at two Acol conventions available. 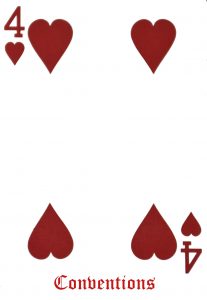 The Swiss Convention is a bid of 4♦ s or 4♣s in response to an opening bid of one in a major suit. It shows a balanced hand with 13-15 points. It has nothing to do with his diamond or club holdings, but is a convention to inform partner how many aces he holds.

Technically it is a Delayed Game Raise. South wants to ensure they find the right fit before a final commitment, so he investigates using the Swiss Convention:

In each case it says Game is on, with slam possibilities. Because the points shown are so precise, opener will know, in addition to the aces held, roughly how the rest of partner’s hand will be:

North has opened 1♥. South with a powerful 15 points bids 4♣s to say he holds two aces.

In the next example, North has also opened 1♥. Again South has 15 points, but this time he has three aces. He tells North this by bidding 4♦ s under the Swiss convention:

In each of the above examples, if North reckons a slam is in the offing he does not have to ask for aces but can go right ahead and ask South for Kings. He does this using the Acol Direct King Convention (sometimes called ADK).

ADK is a direct enquiry for Kings signified by a 4NT bid:

By partnership agreement 5NT may be used to ask for Queens. In the following sequence North opens with 1♥ showing he has 13-19 points, four cards in hearts and a rebid. It may be a different suit or a rebid of his 3♥s to show he holds four cards in that suit:

The 4♣ response from South is Swiss, showing he has two aces and 13-15 points. With interest in a slam North now uses the Acol Direct King Convention, bidding 4NT to ask South for his Kings. The 5♦ reply shows he has one King. North can now account for 11 of his partner’s points, i.e. two Aces and one King. If North is still interested in a slam after this (but is not yet certain) he can bid 5NT to ask for Queens. Either way North is in charge and will take the partnership to his chosen contract, based on his judgment after what South has been telling him.

The point about using Swiss and the Acol Direct King conventions is that it saves a complete level of bidding space over the Blackwood Convention (described later, which uses replies of 4NT and 5NT to indicate honour distribution).

ADK can be used in any situation where aces are already known, and a slam investigation is underway. Two further examples follow responses to the Acol Strong Two opener (described later) where a bid of 3NT or a jump raise to the 4-level deny any ace or void held:

In each case North’s opening bid at the two level is the Acol Strong Two opener. He is either flush with points (18) or holding long suits, even as wild as 6-6.

Both of South’s responses, 3NT and 4♥s respectively deny an ace or a void. Indeed both responses are stultifying. However, North is probably in a position to see slam if South has two Kings, for example. His 4NT rebid is asking for Kings.