This Wolff convention is a 3♣ response to a strong 2NT rebid by opener. 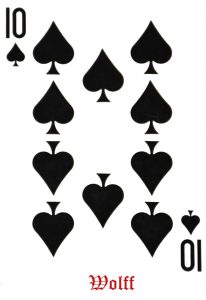 It says “Yikes! My hand is so unbalanced we need to keep away from no trumps.” Opener must respond. It asks opener to bid responder’s original suit if he has three card support, otherwise bid 3♦s as a negative. Any further bid after that is a sign-off.

Wolff is not forcing with the 3♣ bid saying “keep us to the three level”. With the following hand South has a very unbalanced hand, a 6-3-3-1. It is almost suicide to work with this in a no trump contract:

North’s opening 1♥ indicates 13-19 points, as usual. His 2NT rebid fine tunes the point count to 17-18. In response South uses the Wolff convention, bidding 3♣ to say, my first response was showing a six-carder in spades.

Nominally the 1♠ response shows 6+ points and a four-card suit. But Wolff adds to the message the fact he has a particularly long suit. He may have less than 6 points in this instance. Well, he does. He only has four. But remember length is strength.

So, what should North do? He has three options:

So this puts the final decision down to South. So what should he do?

South’s answer to the Wolff 3♦ negative is to sign off with a 3♠ bid of his long suit, stopping below Game. Had South’s hand been different, say only five cards in ♠s and an interest in another suit, his responses to North’s 3♦ negative might be:

One round force. A one round force, or “forcing for one round”, requires partner to bid in response. It does not, however, promise a rebid on the part of the caller.

Rule No 17 – When opening in a suit it is essential to plan your rebid. Failing to rebid, even if partner no bids, remains a cardinal sin.