In theory points for long/short suits are interchangeable for one-suited hands. 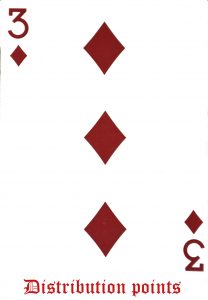 In each case with a longer suit you also need less high card points.

Now consider the long suit count as one point per card over four in your trump suit:

So, as you can see, whichever count you use you get the same answer. The abiding principle is that with shortages or good length you bid on less HCP. The upshot of all this is that you do not need to mentally adjust your point count to plan your bidding. With the above distributions the weaker hands in HCP still end up valued at 14 points.

I prefer not to work this way because you are not valuing your hand entirely on points, but partly on points and partly on the “look” of the hand. This to me is confusing and introduces subjectivity too soon in the bidding round.

Instead, by counting points for distribution you still find your hand in the 13-19 points range and can bid one of a suit as appropriate. With 11 high card points, a doubleton (count one more) and a singleton (count two more), you have 14 points. With 12 high card points and two doubletons (add one point each) your total is again 14 points. In both cases you bid one of a suit, based entirely on your point count: it makes more sense.

There are situations where points for length are not an accurate reflection of value. Consider the following. If South holds the K♥; in a suit bid by West (to his left) it would not be worth 3 points. This is because West is promising at least four hearts and he may well have the A♥. Playing the King would force the Ace but it would not win a trick. On the other hand, if South held the K♠ of a suit bid by East (on his right), it should be worth more than 3 points. If East has the A♠, with additional cards in that suit South can hold back on his King and thus establish a trick in a later round. For this reason experienced players adjust their points as the bidding progresses to reach a more accurate valuation of their hand. To do this they use the “Quick Trick” count.


No suit may contain more than 2 QT.

By the same token some authorities suggest adjusting the value of your hand for distribution. For example:


This is in addition to your normal HCP and is an attempt to reach a more scientific (if more complicated) appraisal of your hand. Clearly, the HCP system is not accurate enough in cases where certain combinations, or lack of them can markedly affect trick taking power.

Both Quick Tricks and Adjusting for Distribution are the realm of the more experienced player. So don’t fret about it until you are ready to complicate your life!

Game is 100 points below the line and the cheapest way to make that is in a contract of 3NT. You need the following to reach this score: