When you cannot follow suit you either trump or discard. The discard can provide valuable information to partner. It will be a card from one of the other two suits.

1) High-low discard to promise a void. 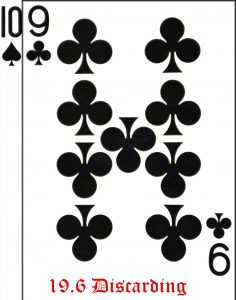 With an 8-2, for example, discard the 8 first, then the 2 on a subsequent round. If partner sees your signal, as he should do, he will know to lead the suit again, expecting a profitable ruff from you.

2) High-low discard to encourage a suit. You can also play high-low in a suit to tell partner you are interested in that suit. For example, with ♠ A Q 9 6 2, discard the ♠9 first, and the ♠2 next time. Again, partner will respond by leading spades to you when he gets the chance. Indeed, the ♠9 alone may be enough to encourage him.

3) Discard low to discourage a suit. When you want partner to avoid a worthless suit discourage him by playing the smallest card in that suit, say, ♠3 or ♦2.

So, when you are unable to follow suit, what should you discard:

4) Revolving Discards. The revolving discard is a very effective system of signalling between partners with “worthless” cards to request a lead back in a preferred suit. Holding a void partner will have a choice of discarding from two side suits to signal interest in the third suit.

An example best describes the system at work. Basically think of the four suits as “revolving”, that is, you imagine the suits as forming a circle: ♠–♥–♦–♣–♠–♥–♦–♣–♠ and so on. It is used by a player when he cannot follow suit.

Supposing a ♥ is lead, and partner has a void in that suit. He can encourage, say a ♦ lead by discarding either a high ♣ or a low ♠. You choose. Take the 10s down to the 7s as the high cards; and the 5s to the 2s as the low cards. In each case you will always have a choice of two discards to impart the same message.  For example, if you want a ♠ lead back to you, signal this by discarding either a ♦ or a ♣ when hearts are lead and you cannot follow suit. In the revolving system the club is above the spade, so you discard anything from ♣2 up to a ♣5. You have the alternative to discard a high ♦ to give the same message, ♦7 up to a ♦10.

Discard. When you are unable to follow suit and you do not wish to play a trump you will play a discard, a card from one of the other suits.

Finesse. A finesse is a means of winning a trick with a card that is lower than a card held by the opponents.

Master. A master is the highest card left in a given suit yet to be played.

Squeeze. Is a tactic to lead in a suit where an opponent has a void and is forced to discard a winner or the guard of a potential winner.

Rule No 26 – In defence it will probably be correct for two-thirds of the time for declarer to draw trumps.

Rule No 27 – Never underlead from an ace in a long suit. So with a five- or six-carder, headed by the ace, lead it.