Two standard packs of 52 cards are used, alternating between each deal. The four players cut for partners, the two highest playing against the two lowest drawn. 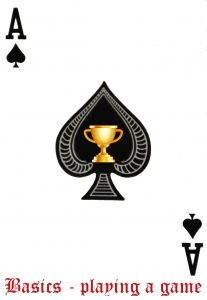 The partnerships then cut for the first deal. Again the player drawing the highest card deals the cards. It is conventional to use the points of the compass to name the four players: North and South play against East and West.

Supposing South is the dealer in the first round. The player to his left (West) will shuffle the pack. South will then pass the pack to East who will cut the deck. South then reassembles the cards and deals in a clockwise direction starting with West. While South is dealing his partner (North) shuffles the second pack of cards and places it on West’s left. For the second deal West will pass the shuffled pack to South to cut. West will then deal. In this way the job of dealer travels round the table in a clockwise direction.

The players wait until South has dealt all the cards before picking up their hands and sorting them in order, highest to the left and so on. It is advised to order the suits in your hand: spades, hearts, clubs and finally diamonds. Although clubs are lowest in rank, this arrangement prevents any confusion by assembling the red cards together.

The dealer now has the opportunity to open the bidding. The auction ends after three no bids in succession. I am told “Pass” is preferred in the UK to the call of “No bid”, though I have never been conscious of this. In games that I have played it seems that players have used either term interchangeably. I suppose you might say “No bid” having already been in the bidding but say “Pass” as a sign off. But I can’t see that it matters much.

Let’s assume South is declarer in a contract of 2♥s. That means he promises to make eight tricks with hearts as trumps. Left of declarer (West) leads to the first trick. Only after this move will South turn over the dummy (North’s hand) and arrange the cards in four columns. South will compare the two hands. He is going to play both of them. He will note the definite tricks he can make. He will also count his losers. If he is short he will look for additional tricks and prepare his communication strategy between the two hands (more about that in a later Chapter). For now we will just play the hand. 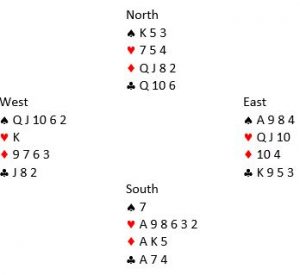 As South is declarer his partner (North) becomes the dummy, and his hand is laid face up on the table after the opening lead has been made. North must sit it out and watch while hopefully his partner makes the contract, in which case he will no doubt say, ‘Well done, partner!’

West leads the Q♠ to the first trick. South now puts the dummy down and works out his communication. He needs eight tricks with hearts as trumps. And remember, in a real game he will not be able to see any of the opponents’ cards! The opponents will see the dummy, of course. So each player already knows the location of 26 cards.

South counts up his trumps. Together the partnership has nine hearts. The opposition will have the other four and, for the purposes of planning his strategy South will assume an even split 50/50; that is, East and West hold two hearts each. As the play progresses South will realise, however, that the split is against him, 1:3. He will adjust his game accordingly.

In either event, with hearts as trumps South can expect to make four tricks. If he manages to draw tumps then his diamonds will make four more: his own Ace and King will marry North’s 8 and 2. If South gets his communication right (a key challenge in Bridge) dummy will lead the Q♦ then the J♦ to make a further two tricks. Only if trumps are drawn first will South prevent East from ruffing when he runs out of ♦ s. South has a spare trick with the A♣. And with his singleton ♠ he will be able to ruff any further attacks from the opponents in that suit. East, of course, sees the K♠ in dummy and will pounce with his Ace if the King is drawn.

Following the Q♠ lead, South will play high from the dummy with the K♠ and succeeds in pulling East’s A♠. South is now void of ♠s and is ready to ruff. Incidentally, South had already written off his K♠ believing no matter what he did it was a gonner.

An experienced player can often work out from a lead where the remaining high cards in that suit are located. The bidding in the first stage of the game could have provided further clues. Though as it happened in this deal neither East nor West contributed to the bidding. As we shall see in due course this in itself is a clue, suggesting neither hand has more than 10 points. If South keeps a close eye on the fall of cards he may be able to deduce what East and West have left.

The Queen and Ace in ♠s have already been spent by the opponents, accounting for six points in their combined holdings. Note that North-South’s combined high card point count is 23. As there are 40 points in a pack, the East-West partnership share the remaining 17 points. So they now have 11 points (17 – 6) left. Yes, it is useful to be good at maths in this game!

After the first round South has worked out that his opposition hold between them: ♥K Q J, ♠J and ♣K J in the top cards (11 points), though he is not sure of the split.

West’s first lead of the Q♠ usually means “please play that suit back to me”. So South will make a pretty good bet that West has the J♠. In this way you can see how the minds of Bridge players work! Those really experienced players with a good memory can probably place the location of all the cards by the time we reach trick four.

Back to the game. So as you can see, East obliges and does indeed return a ♠. Unlucky for them, as we know, South is void in that suit. He wins with his cheapest trump of 2♥s. West dumps his 2♠s, followed by North’s 3.

South now has the lead and he has already decided that, when he does, he will lead out trumps and mop up the opposition’s armoury. He leads with the A♥s. West drops his King. Normally second player plays low. South quickly suspects this was a singleton ♥. A second lead from South in ♥s confirms that West had a singleton ♥ since he makes a ♦ discard. South now knows that East has the ♥Q J. This is manageable. South’s remaining ♥s should now make five tricks in all. East wins with ♥J. He returns another spade, a somewhat hopeless gesture. But he is on a sorry wicket because any other lead will be covered by South who is still sitting with two aces. South wins another trick with a trump 6♥.

There is only one trump left out there. South launches his attack once more with an 8♥, and East’s Q♥ has to follow suit. Bereft of ideas East repeats a return of ♠s, and South trumps once more.

South is sitting pretty. He now draws the shorter suit [Explained in Basics of bridge] by leading out the A♦ , then the K♦ before switching the lead across the table from his 5♦ . And it’s all over! Dummy now has control, winning with Q♦. He follows this up with another lead with his J♦ to take another trick, before leading back to South with the 10♣ who takes the trick with his Ace. South leads back to dummy with the 7♣, leaving East to win with the K♣, and then take the last trick with his 9♣.

North-South win the contract of eight hearts plus one overtrick. Had the Hearts been evenly shared between the opposition that overtrick might not have been made. The partnership earns 60 points below the line towards game (30 points per trick over six) and 30 points above the line for the extra trick. The finer details of scoring will be dealt with later.