No trump rebid after a raise or a takeout. North opens 1♥. 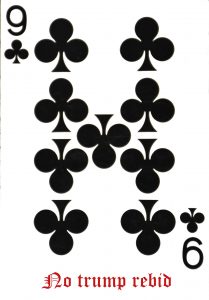 He intends to bid in No Trumps on his rebid to show 15+ points and that his ♥s are a four-carder and he has no other biddable suit.

Over a raise or takeout by partner North will rebid accordingly.

No trump rebid after a raise:

No trump rebid after a takeout:

No Trump rebids – adjusting the values

As has become abundantly clear, Acol No Trump bidding indicates a very specific point count. In opening, in responding, in rebidding NT (aside from one or two Conventional calls) describe the hand fairly comprehensively in terms of points and distribution. North opens the bidding with one of a suit. A major or minor bid shows the same point range: 13-19 points. North’s rebid will show a balanced hand and the following points:

If South responds 1NT to a major opener, North’s No Trump rebids need to be adjusted as follows:

If North opened in a minor suit and South responded with 1NT, then again North’s No Trump rebid points are adjusted:

South’s 1NT response to 1♦ opener shows 7-9 points. (To 1♣ his 1NT response would show 8-10 points—hence the point adjustment for North’s rebid)

If North opened in a minor suit and South responded in a major, North’s No Trump rebid points are also adjusted slightly:

Finally, following a simple takeout at the two level:

South’s takeout at the two level shows 9-15 points. So again North’s NT point spread needs adjusting. He can go to Game at 3NT with 16 points or more since the minimum combined points would be 25. Below this he will show 14-15 points with a 2NT rebid. If South has a supporting balanced hand he can accept the invite to go to Game in 3NT, provided he has 11+ points for the combined 25-point holding.

The Directional Asking Bid (DAB) is a bid in a suit in which the bidder has losers but that if partner can protect, could still produce Game. It is used when opener can see Game based on the combined points. He bids in the opponent’s suit to show where his weakness lies.

North sees Game in spite of South’s limit bid of 1NT (showing 6-9 points). However, he has doubts because he only has a partial stop in ♥s. So he bids 3♥ on his rebid to show his weakness, thus “Asking” South to show Game interest if he has a partial stop in that suit. In bidding 3NT, South is saying, “Yes, I have a ♥ partial stop.” North will Pass, leaving partner to play for Game in NT.

South’s negative 1NT shows 6-9 points, a balanced hand, no biddable suit and no more than a three-card diamond suit. West overcalls with 2♥. North has a partial stop in hearts so he bids Dabs, 3♥ in opponent’s suit, to ask South to go to 3NT if he also has a partial heart stop.

In the next hand North has 18 points and another 6-card diamond suit. South replies 2♣ to his opening bid of 1♦. North’s 2♠ Dabs this time shows weakness in spades and asks South to go to 3NT if he also has a partial stop in spades.

In the final example, with 18 points North once again is looking for no trump safety nets. He opens the bidding with his 5-card suit, 1♥. And South replies 2♦. North’s 3♣ in opponent’s suit is Dabs.

With a partial stop in the suit in question (♣s) South will bid 3NT on his rebid.

Back to Top
To continue reading go to: Cue bids