In Whist players try to win tricks by playing the highest card. 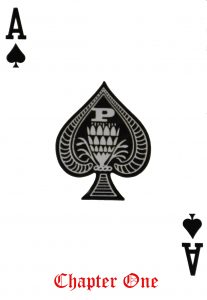 A trick is four cards, one from each player. The winner collects the trick and places it face down to his left. There are thirteen tricks in a standard pack of cards (4 suits of 13 each = 52). No jokers, thank you very much! The cards are all dealt out at the beginning of the game to four players. The winner of the game is the one with the most tricks.

In Bridge the four players cut for partners and the two teams compete for tricks.

A cardinal rule (there are quite a few) in all trick-taking games is that players must follow suit if they can. Otherwise, with a void in that suit they may trump if appropriate, or discard. The trump suit ranks above the other three suits for the particular round of cards. For example, if clubs was declared the “trump suit” it would rank above spades, hearts and diamonds. In a No Trump contract the normal suit ranking applies, with No Trumps the highest.

So let’s dive right in and play a quick round of Bridge before we go on to consider the process of bidding. Go to: Playing a suit contract

One useful rule we can learn from the accompanying game is the principle of drawing the shorter suit. When South has cleared the trumps his next move is to draw the shorter suit, his ♦s in this case. Examine South’s hand and that of the dummy to see which has more cards in a given suit. You should begin by playing the high cards in the hand which is shorter in that suit. In this case South’s hand has the shorter holding of ♦s, so he plays from his own high-ranking cards in diamonds towards dummy.

On average there is a good chance the first two rounds in a suit proceed without a trump or a discard. In other words all players will follow suit until there are five cards left in that suit: after two rounds of spades, say, there will be five spades left amongst the four players. It is unusual—though not impossible—for them to be so evenly spread as to allow for a third round of spades. A player void of spades will likely capture your high card with a low trump. So a third lead of any suit is not recommended. Suppose you won a spade trick in your hand with the Ace, then a second trick from your dummy with the King, and the distribution of the cards was such that an opponent had to discard with a Queen. This almost guarantees he is now void of spades. Of the five spades left, you have a Jack in dummy. So how can you win a trick with it? After all it is the highest-ranking spade left in the game.

The answer is “to establish the suit”.

Establishing a suit is the process whereby you eliminate the opponent’s ability to take any further tricks in that suit. Remember, they have to follow suit. If you lead the A♠ say and third-in-hand has a singleton ♠, which happens to be the King, then he must play it. When the threat is covered by the combined spades of your hand and the dummy’s, then you have established the suit. Any further play in spades will earn you tricks and give the opposition a bit of grief.

There is a corollary. Any opponent now void in spades is able to trump your established suit. So the next thing to do before running a third round of spades, is to clear trumps. If there is another suit worth establishing well then you can consider doing that first before drawing trumps. It’s a question of judging each game. I think it is advisable to draw trumps two-thirds of the time.

In this way, by exhausting opponents’ trumps you are free to run any established suit to win extra tricks. If you still have trumps then you hold them back for later play.

Entry. An entry is a card that will win a trick and gain the right to lead to the next trick.

Establish. To transform losing cards into winners by capturing or forcing out higher cards held by opponents.

Rule No 1 – you must always follow suit where possible.