Weissberger is asking partner to bid his 3-card major. 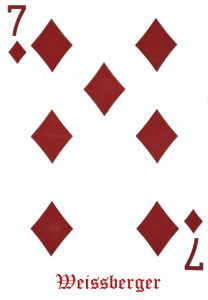 It is signalled by a bid of 3♦s following the Stayman 2♦ negative response on rebid by opener. It may be used instead of Extended Stayman, and operates as follows:

The first round of bidding is the usual Stayman asking opener if he has a four-card major. North says “no I don’t” (2♦s). South now bids the Weissberger 3♦s. This convention is used to show a holding of five spades and at least 5-4 in majors. He could even be 5-5. In other words, South is minimal in minor suits. South shows a point range of 8-14. With 5-4 in majors his point range must be 10-14.

North is being asked by Weissberger to bid his three-card major, otherwise he returns a negative bid by reverting to his No Trumps.

In the next hand South has 12 points and two doubletons, not ideal for a No Trump contract. He is looking for a spade fit.

He knows that North has a minimum 12 points (he could have up to 14). But they at least have a combined minimum of 24. With a couple of more points in North’s hand, a void or a singleton might be enough to get them into Game.

South invokes Weissberger to tell North he has five spades. North’s 3♥s shows he does not have a four-card major. He has three hearts and only two spades. If he had three spades he would have bid 3♠s, and they would have had eight in that suit.

North will know South is short in minors.  With partnership experience he will assume two doubletons at best. He will check his own minor holdings and go from there. Remember, in looking for a fit both partners will be anxious to ensure controls in all suits should they end up in No Trumps.

South signs off with a bid of 3♠s, his best suit.

To continue reading go to: Sharples