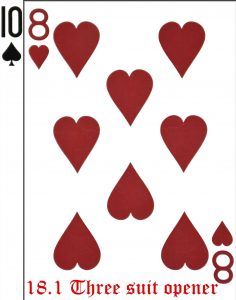 The pre-emptive three-suit opener is typically made with 6-10 points and a 7-card suit. Honour points should not be isolated.

With spades as trumps North counts 2 playing tricks for his A-K plus 1 more for each cards below the top three. That’s another 4, making 6 playing tricks in all. So with this 7-carder North can open 3♠.

The three-suit opener can also be based on a maximum of 10 points and a very long suit. A typical hand might contain a 7-card suit with 7 points. So there are several ways to judge what are, after all, very unusual hands.

These hand types should not contain:

The three-level pre-emptive can also be made third in hand as a “sacrifice bid”. The holding is unlikely to be of value in support of partner’s hand, and certainly worthless in defence. This is a calculated risk, balancing the loss if opponents win the contract and the loss for playing your own contract and going down.

The three-suit opener shows a weak hand, probably with nothing outside the bid suit. For this reason proceed with caution. It is rarely a good idea to rescue partner from his pre-emptive bid, unless you have an exceptionally powerful and long-suited hand of your own. Responder will either pass, bid 3NT or raise partner’s suit. With the following hand South raises partner to Game (even though he has a doubleton in spades):

South has 16 points, modest support for North’s trumps, but some good outside values. With less South would have passed.

The hand can also be valued using the Quick Trick count method (see below).

In the next sequence North opens 3♥ showing at least a 6-carder. South raises partner to Game in 4♥. His doubleton is safe since North will have at least six hearts.

In all of the following instances, South on 12 points, does indeed pass:

In the next example,  South has 19 points and launches a ‘one round force’:

South’s change of suit to a minor constitutes a slam try. In reply to South’s 4♣ North also changes suit cue bidding 4♦. This signals he has the A♦. The partnership will continue to exchange information, hoping to find a fit for a possible slam contract

Some players take a 3-major response as Game forcing; and a 4-minor response as a slam try (as in the above example). This approach is for partnership agreement. Thus:

In the next example, South’s response in a major is Game forcing:

Again he has 19 points, but for this hand he shows his 4-card major. His 3♠ asks North to indicate his major fit. North must have at least seven hearts, so the partnership tally is ten cards in that suit. North’s minimum 7 points will give them enough for Game. North is left to choose the suit. I guess he will go for 4♥s.

Finally, the no trump negative response. South has 16 points in the following hand. To partner’s 3♦ pre-emptive opener he responds 3NT to indicate a balanced hand.

Quick trick assessment may assist in working out your response to a pre-emptive bid. In response to an opening bid of three of a suit, for example, you can generally assume partner has enough for 6 tricks. You need a further three Quick Tricks for a 4-level response in majors; four quick tricks for minors. This is, of course a rough guide, and you can assess your hand based on the following:


Back to Top
To continue reading go to: The 3 no trump opener