Smolen shows a hand heavy in the major suits. It is a bid of 3♥s or 3♠s following the Stayman 2♦ negative response. 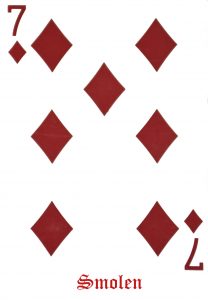 Remember the Stayman negative denies a four-card major. Smolen is intended to avoid playing in a No Trump contract on the assumption that their distribution is unsafe. Smolen also seeks to keep opener’s hand hidden as declarer.

There is a later stage in the Smolen sequence to show a six-carder, insisting on Game on a transfer basis. North will always end up as declarer (see examples below):

In the first bidding sequence, South bids the Smolen 3♠s to show he has four spades and at least five hearts, possibly 6. He asks North to show a 3-card ♥ suit. However, North’s 3NT is a negative bid, showing a doubleton in ♥s (partner’s longer suit).

2] North has support for spades:

In the next example, South bids 3♥s in response to North’s negative 2♦ s. He shows he has four hearts and five spades. Again he wants North to indicate if he has 3-card major, this time in ♠s. North has the goods, bidding 3♠s. South is happy and raises to Game. North is declarer with spades as trumps (because he bid the suit first).

In each case, South is showing a minimum 10 points plus distribution, and is Game-going. The convention is clearly to avoid a No Trump contract, given South’s unbalanced hand, while at the same time making the opener declarer to keep his hand hidden.

South’s second reply of 3♥s is Smolen showing four hearts and five spades. North shows he has three ♠s so raising to Game and becoming declarer.

2] North has no support

South bids 3♠s to show he has four spades and five hearts. North has only two ♥s, so he replies with the 3NT negative bid, but will remain declarer.

South has a six-carder. Following North’s denial of a four-card major, South invokes Smolen asking partner to bid if he has a three-card heart suit. (South’s 3♠s shows four spades and five hearts).

North replies with a negative 3NT. And like the previous example, the bidding would have ended there but for the fact that South is sitting with six, not five hearts. So he presses on, bidding 4♦s to push North into a suit Game contract. North is declarer in 4♥s.

Let’s consider the dialogue against the above bidding:

In this final bidding sequence South’s majors are reversed. He has a six-carder spade suit. His 3♥ Smolen says he has 4♥s and five ♠s. North has no more than a doubleton in spades so returns the negative 3NT. South, however, has six spades and shows this with a response of 4♥s, asking North to go to Game. North obliges and closes the auction at 4♠, and he will once again be declarer.

To continue reading go to: Weissberger