Uranus was the first planet to be discovered by telescope: by William Herschel in 1781. It is about four times the size of Earth. Uranus and Neptune are the planets furthest from the sun. They are very hard to see. If you know exactly where to look, you might spot Uranus, but to see Neptune to you need a powerful telescope. Uranus appears as a pale blue planet, and almost featureless with a very sparse ring system. The light blue colour is from methane clouds. One of its moons, Miranda, is thought to have been completely destroyed by the impact, only to be reformed from its own debris. 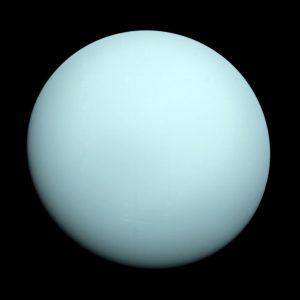 As for its name, for once it was the Greek’s turn. Uranus is named after the Greek god of the sky, Ouranus. According to myth he was the father of Saturn and the grandfather of Jupiter. As kids, they must have had a better diet!

Uranus has the coldest atmosphere of any of the planets in the solar system, even though it is not the most distant from the sun. That’s because Uranus has little to no internal heat.

Most planets spin in the direction of their orbit; that is to say, anticlockwise. But as with Venus, Uranus rotates on its axis from east to west (in a clockwise direction as viewed from a north pole angle). Uranus is even more unusual in that it rotates at a 98° angle to its plane of orbit. So, instead of apparently “rolling” along its orbital path, it is in a reverse spin against its direction of travel.

The reason for all this is that Uranus was knocked over on its back by the gravitational force of a large moon.  This moon left when passing a far larger body and migrated to another planet.

At 2.87 billion kilometres distant Uranus is nineteen times further away from the sun as Earth and receives just 0.25% of the sunlight. It is 2.57 billion kilometres from Earth. The planet has a diameter of 51 500 kilometres. Period of rotation (a day on Uranus) is 17 hours 14 minutes.

Because it is so far from the Sun, it takes Uranus 84 years to make one complete orbit! The planet’s unique sideways rotation makes for weird seasons. Its north pole experiences 21 years of night-time in winter, 21 years of day time in summer, and 42 years of day and night in the spring and fall—as research by Nasa shows.

Unlike the other gas giants, Uranus has no internal heat source and is often referred to as the ice giant. At least 80% of its mass is a fluid mix of water, methane and ammonia ice. Uranus is 63 times the size of Earth and yet only 14.5 times the mass. Its density is twice that of Saturn. Taken together then, it is too massive for its main ingredient to be hydrogen, which is the main ingredient of the bigger gas planets, Jupiter and Saturn. Its internal structure is made up of an inner layer of water, ammonia and methane ices, as well as a core of iron, magnesium silicate, and possibly ice, with a core temperature of 4 737°C. It is believed that below the crust lie oceans of water. Electric currents within its icy layer are thought to generate the planet’s magnetic field.

The mantle is surrounded by a gaseous layer of hydrogen (83%), helium (15%) and methane (2.3%), with traces of hydrogen deuteride and ethane. The blue-green pallor of the planet derives from the absorption of light by methane. In the clouds are layers of mist, creating a haze at high altitude. The lowest temperature recorded at cloud top cover is -224°C.

The planet’s faint rings were first discovered in 1977. Initially, five were identified. Closer inspection by Nasa satellites, including Voyager 2, has indicated there are no less than 13 rings. These extend from 12 400 kilometres to 25 600 kilometres from the planet. They are made up of charcoal-dark pieces of carbon-rich materials. The rings appear to be in two distinct groups. The inner group consists mostly of narrow, dark rings, while the outer system comprises two more distant rings, which were discovered by the Hubble Space Telescope, and are brightly coloured: one red, and one blue.

Uranus, like all the gas giants, has a magnetic field. Research suggests it is generated not at the core, but by, say, a water-ammonia ocean. If this isn’t unusual in itself, consider that its magnetic field does not flow from north to south pole (like normal planets) but is tilted to the rotational axis by about 60°. Neptune is the only other planet in the solar system to present with such an oddity.

The moons of Uranus

The planet has 27 moons, of which thirteen are within the rings of Uranus. Nasa’s Voyager 2, the only space probe to visit the planet (in 1986), passed within 81 500 kilometres of the cloud tops. Voyager studied the nine known rings at the time and discovered two more. Research suggests that the rings formed from a larger moon that was ripped apart by the planet’s gravity.

The major moons are Miranda, Ariel, Umbriel, Titania, and Oberon. As to be expected they were the first to be discovered. Their distance from Uranus range from around 130 000 kilometres to about 580 000 kilometres. They are dense rocky bodies with icy surfaces, featuring impact craters and volcanic water-ice flows. Titania, the largest, is only half the size of our moon. There are a bunch of smaller bodies inside Miranda’s orbit—sixteen in all. These are “ inner moons”. Of the outer moons—there are eight in all—only Caliban is notable, orbiting at a distance of 7.2 million kilometres. Many of them follow retrograde orbits.