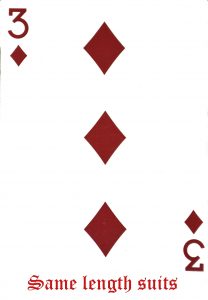 In this section we look at same suit lengths.

Approximately 28.7% of all hands contain either a 4-4 or a 5-5 biddable suit combination.

[4-4] With two suits of the same length (for example, 4-4-3-2) you should open with your highest-ranking suit first. The exception is with ♠s and ♣s where you reverse bid, bidding the ♣s first. This allows partner to respond in diamonds or hearts while still giving you the opportunity to bid a spade at the one level. If you opened with a ♠ instead, your partner could only respond at the two level, forcing you to bid 3♣ if you wanted to show your clubs as a second suit. All other two-suit combinations can be bid highest first, with your rebid kept to the two level. A 4-4 is the simplest two-suiter. It requires just two bids to show distribution (bidding sequence A-B).

There are a number of “ifs” and “buts”. If the higher-ranked suit is too weak to open then treat the hand as a single 4-carder and bid the suit accordingly. If your partner replies with a takeout in your weak suit you must decide whether to support with a raise, rebid your opening suit as a sign off or pass. For example:

There are 13 points, enough for a one suit opener. Normally you would bid ♠s first. But the suit is too weak. Bid 1♥. If North responds 1♠ you have learnt three things:

You can only improve on this information with a further round of bidding. But you opened on a minimum and there seems little room for further exploration. Your best option here is for South to raise his partner to 2♠s. Unless North has more to offer he will Pass.

[5-5] If both suits are 5-carders or longer you need three bids to tell the full story. With a 5-5 combination and two good suits, you rebid the second suit twice if you get the bidding space (three rounds). Consider this hand:

This is a good 5-5 combination with 14 HCP. South opens the bidding with 1♥ and then rebids 2♦ s in response to partner’s 1♠. If partner bids again, South will then repeat his second suit, that’s 3♦ on his third bid. This is the only way in Acol to show a 5-5 pattern. Partner will know the suit you opened with also has five cards. (Bidding sequence A-B-B).

Because partner responded twice gave South the bidding space to show that his second suit is a five-carder (because he has bid it twice), while the first suit (♥) is also at least a 5-carder.

Suppose you have two biddable five-card suits both in majors. Again, the rule is to open with the higher ranking suit, irrespective of relative strengths. This usually affords the  most bidding room.

Even though ♥s is the stronger suit you bid the higher-ranking suit first, opening with 1♠. You do this because it sets up a more economical way of communicating. Note that South only has 12 HCP. But with two biddable 5-carders he can add one point for long card count in the suit he is bidding.

With two five-carders, ♥–♦ , you would bid ♥s first, the highest-ranked suit. This means your partner can respond with 1♠ or 2♣, allowing you to show your diamonds at the two level. If you were to bid 1♦ first instead, your partner is limited to a 1♠ response at the one level. To show ♣s he would have to bid at the two-level, and this would shut-out too much communication.

With ♠-♣ however, opener bids ♣s first, the lowest-ranked suit: 1♣. The reason for bidding ♣s first allows your partner to respond in diamonds or hearts while still giving you the opportunity to mention your spades at the one level. Essentially, the more bids you can make before contract is settled the more information you and your partner are able to exchange. These two rules do just that.

To continue reading got to: Different length suits