The double definition is a clue that defines the answer twice. 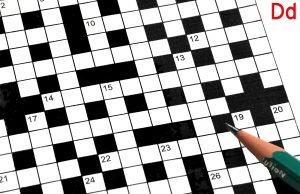 It is often indicated by the keyword “and”. In the following examples, note that being and giving are also flags for the double definition.

1] Overcome being pretentious (8). The answer is that both words mean “affected”.

2] Creep giving lip (4). The answer for both words is “edge”, the first a verb to creep, or to edge forward, and the second a noun, the lip or edge of something.

3] Run off a quantity of cloth (4). The answer is “bolt” meaning the verb to run off, and the noun a bolt of cloth. Sizes vary for a bolt of cloth, but a roll of cloth 100 metres long by one metre wide would fit the bill.

4] Crowd present  (4). In this clue there are only two words, and both are definition words. You want one word that means both. The answer is “Host”. A crowd is a host. Present (verb) is to host.

5] Subject to checks and filmed. The answer is “screened”.

I have mentioned keywords and flags quite often. But just so you don’t get too carried away, remember you cannot always rely on these words as indicators. Such is the world of the cryptic clue that keywords and flags may instead be their literal meaning!

By the same token “casually” should not always be taken literally. Indeed, it is often an indicator asking for a colloquial word or term. Casually might also be referring to an old, archaic way of expressing something.

Watch out for two-word clues where the question splits it differently. For example, in “mean and swell” the answer is: “means well”.

Sometimes the indefinite article ‘a’ has to be included in the answer. For example, in:

1] Maintained a voter originally made a mistake (7). First use the “a” from the clue towards your anagram. Originally is letter manipulation telling you to use the first letter from “voter” V. For “made a mistake” use ERRED. The answer is “averred”.

But never assume this is always the case. It rarely is and you often need to ignore the indefinite article!

2] Troop’s physical restraint right out the window (6). In this clue “troop” not “troop’s” is the definition word.

Palindromes crop up occasionally. A palindrome, by the way, is a word spelt the same way forwards and backwards. For example:

1] Direct attention up and down (5). This is a down clue from a crossword. “Direct attention” is the definition word. Up and down means the word reads the same either way, a palindrome. The answer is “refer”.

3] Abba solos wow Anna (11). These four words have one thing in common. They spell the same backwards. The answer is “palindromes”.

Sometimes a setter uses an apostrophised word (indicating omission) where there’s a good chance the spelling is contrived to suit the needs of an anagram.

For example, in ‘ere instead of … the answer is an anagram of EREINSTEADOF