A homonym is a word with the same spelling or sound. They are words that “sound like”. For example, in “sounds like it’s here”, might mean the word you are looking for is HEAR. 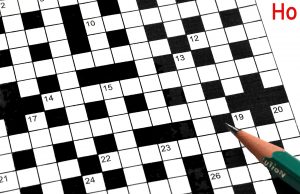 Keywords to look for that might suggest a homonym are:

audience, audition,broadcast, for audition, from report, heard, implied on the radio, in audience, in speech, might mean, might be, on radio, on the radio perhaps, picked up, pronounced, report, report of, reported, rumour, rumoured, said, sounds like, spoken, vocally, when conversing.

As an example, note that the word “Audience” suggests something that the audience hears. And in the phrase “Might mean I”, use EYE as part of your answer.

2] Nail chorus heard to be tricky (6). Heard is the homonym flag. For nail use TACK and for chorus use SING. This gives you TACKSING. The answer, which sounds like this, is “taxing”.

3] End story for the listener (4). Listener is the keyword for the homonym. To the listener it “sounds like”. The synonym for story is TALE. So the answer is simply “tail”.

5] Recognised audio version of novel (4). The homonym indicator is audio. “Recognised” is the definition word. For novel use NEW. The audio version (what you hear) gives the answer “knew”.

6] Hear man’s address to unknown puzzle (7). Hear is the homonym flag. Man’s address is “mister”. What sounds like this is “myster”. Symbol for unknown is “y”. Puzzle is the definition word. The answer is “mystery”.

Here is a good double homophone no less! The definition we are looking for is “secret fascination”. The homophone flag is “reportedly”. For pine read MISS and for furniture material read TEAK. MISSTEAK, the definition is “Mystique”.