Read any book on Bridge and, whatever the system, you will be given clear guidelines on what to 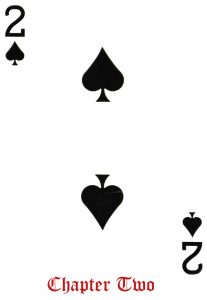 bid based on the points held in your hand. You may, say, open “one heart,” because you have between 13-19 points, at least a four-card suit in hearts, and a rebid. But what does this mean?

To evaluate a hand we use the High Card Point (HCP) count, popularised by a man by the name of Milton Work (1864 – 1934). You may sometimes hear it referred to as the “Milton Work Count”, given he wrote lots of books about it—though it was not originally his idea.

Most experts use the point count to value their hand. It is very easy to use and essential if you are to make head or tail of the rudiments of bidding and the use of conventions.

Once the dealer has finished you may pick up your cards and assemble them in order. You will have 13 cards and a typical arrangement is from left to right ♠ ♥ ♦ ♣ in that order, highest card in each suit to the left. Lowest ranked ♣s are slipped between the two red suits to avoid confusion. Let’s look at a sample hand:

How many points have we got? Count up HCP as follows:

In the hand above we have 14 points. So you open 1♦ to show a holding of a minimum of four diamonds and 13 points. Your rebid will provide further information, perhaps that you have 14 not 13 points and five diamonds. Your rebid will also depend on how your partner responds.

The logic behind HCP

So why can’t we open one of a suit with 12 points?

A standard pack of cards is used providing 13 tricks in all, so that each trick must be worth 3 and a bit points: (40 divided by 13).

The average outcome would be for the four players to win three tricks each, with the last one remaining in contention. So what about this thirteenth trick? It stands to reason that the player who wins the fourth trick wins the game. This is the basic logic behind a player intending to open the bidding at the one level. He promises four tricks, one more than the average hand. He needs an extra trick to do this, so he must hold an extra three points. This is why he requires 13 points in HCP to open the bidding at the one suit level, not 10.

It is upon this principle that the whole of the Bridge valuation and Acol bidding system relies.

Why bid one not seven?

There are thirteen tricks in a deal. To take more tricks than the opponents you have to capture at least seven tricks. For this reason the first six tricks are disregarded and the bidding starts at the one level, meaning a promise that the partnership will win seven tricks. For example, an opening bid of 1♠ is a promise to make seven tricks with spades as trumps.

Incidentally, the highest bid you can make is seven. For example, a bid of 7♥s would mean a contract to get all thirteen tricks with hearts as trumps. You don’t often see a bid like that, but when you do it is pretty epic.

The dealer is always first to open the bidding. To do so he must have at least a four-carder with a minimum of three points (two high cards) in that suit. For example:

Any five-carder is biddable as an opener, even if it has no points at all.

Back to Top
By Nigel Benetton – based on the UK Acol Bridge Bidding System
Last updated:Thursday, 08 April 2021