The sun is essentially a seething mass of liquids and gases, mainly hydrogen crushed by gravity so powerful that electrons are fused together by a process we call “fusion”. 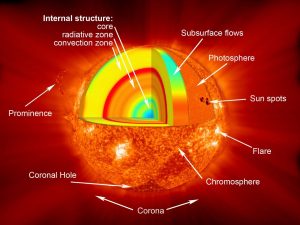 At an average diameter of a bit over 1.39 million kilometres the sun is a pretty small star. Its volume is equivalent to 1.3 million Earths, while its mass is equivalent to over 330 000 Earths. The average density of the sun is about 1.4 times that of water (water being 1gm/cm3). The sun is about 91% hydrogen and 8.9% helium in terms of the number of atoms (70.6% and 27.4% respectively in terms of mass), and a trace of lithium.

There are five layers above the core: the radiative zone, the convective zone (including a layer of subsurface flows), the photosphere, the chromosphere, and the transition zone. Extending above this for up to about 29 million kilometres is the corona. Each layer has its own dynamics, temperature and structure.

The visible layer is the photosphere, which we see as the surface of the sun. The temperature here is 5 500°C. It is about 400 kilometres deep. Below this is the convective zone, 181 000 kilometres thick. The temperature here ranges from 5 500°C against the photosphere to 1.9 million °C at its deepest level. The radiative zone is next at some 375 000 kilometres deep and is much denser. Finally the core, which is 150 times denser than water. Put another way, that’s ten times that of lead and yet it is still composed of gases—ionised hydrogen and helium. The core is running a temperature of 15 million °C. It is some 277 000 kilometres in diameter.