The one no trump overcall indicates 15-17 points and a stopper in opener’s suit. 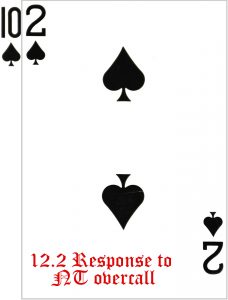 Note that even Acol players who normally play the weak no trump use the strong no trump in the overcall position.

So if West also happens to be sitting with a balanced hand he should respond as follows:

West should pass with less than 8 points unless, of course, he has an unbalanced hand. With two doubletons and a good five-carder he should try to steer partner away from a no-trump contract. In such a situation West can be confident that overcaller will have at least two cards in any suit he cares to mention since his bid promised a balanced hand.

If West has two strong suits he could consider the cue bid. Supposing he were 5-4 in the major suits, and had two doubletons.

East overcalls 1NT indicating a stopper in diamonds and a balanced hand. On the other hand West has doubletons in both minors and is 5-4 in majors. His 2♦ says nothing about his diamonds, as a bid like this in opponent’s suit is the cue bid, asking East to respond to show if he can support partner in ♠s or ♥s.

Note that even if opener and overcaller were on their minimum point counts for the bidding (13 for North and 15 for East) West could never have more than 12 points in the above scenario—unless someone is over-reaching themselves!

Response to a jump overcall

The jump overcall promises 16+ points. Since opener has already accounted for at least 13, it leaves no more than 11 points to be shared between West and opener’s partner. Good chance it will be less.

This is a pre-emptive overcall from East with a bid of 2♠ promising to take between five to six tricks with his hand alone. It does not leave much for West to do who, on average, will have no more than six points. With support—a three-carder spades— for a combined 10 tricks he can raise his partner to 3♠.

If West, on the other hand, had little support (less than three spades), and a more balanced hand he could bid 2NT. Otherwise he will no bid.

Note: modern players tend to reserve the jump overcall as a pre-emptive bid to show a weak hand. Under this arrangement, they use the double overcall to show a strong hand of 16+ points. The weak jump overcall was briefly covered in Chapter Eleven. Overcalls

Response to a takeout double

The takeout double in the overcall position over a one suit opener indicates a strong hand carrying 13-19 points (in other words, enough points for an opening bid). It also shows a shortage in opener’s suit and support for any other suit his partner might bid.

Note that the double over an opening bid of 1NT is for penalties and indicates overcaller has a balanced hand and 16+ points.

The response to the takeout double over a suit opener is as follows:

So what should West bid?


Back to Top
To continue reading go to: Intervention and distribution
By Nigel Benetton – based on the UK Acol Bridge Bidding System