The opening bid and its first response usually hint at the final contract. The partnership requires the following Combined Points to make their proposed contract. 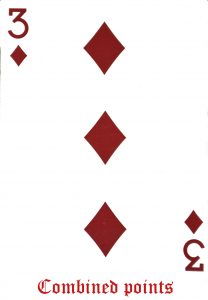 Opener will add his partner’s points as indicated by the response to his own points and should be in a reasonable position to decide whether the partnership has sufficient for Game—even to explore slam possibilities.

So if you have two or more biddable suits, which one do you bid first? We need to take this in stages because it can get pretty complicated with a distribution such as 5-5-2-1, to say nothing of 4-4-4-1. And a hand shaped 6-5-1-1 is a bit of a nightmare.

Just a quick note to say that distribution patterns are shown left to right in order of quantity, not order of rank. For example, 4-4-3-2 says nothing about spades and hearts; just that you have two four-carders. They could be 4♥s – 4♣s – 3♦s – 1♠, for instance.

Acol is very specific about distribution. Opening one of a suit shows you hold a minimum of four cards in that suit. Repeat the suit on rebid and you show five cards in that suit. In response partner follows the same rules. If he raises your suit it means that within just one round of bidding you know that each of you hold at least four cards in the same suit—a total of eight against opponent’s combined five. It may take no more than two rounds of bidding to discover the distribution patterns of most of the cards.

Discovery will take longer for broader distribution patterns, such as a hand with two four-carders. Acol tries to cater for this with a structured approach.

In bidding two suits you are offering your partner a choice. But he also needs to know which you prefer. The bids going back and forth hopefully will be informative enough to achieve this.

So with two biddable four-carders what does opener do? And note the emphasis: the suit has to be biddable.

There are three simple rules for opening:

They are called simple because they do not work for complex hands! Which is why there is an unwritten fourth rule: break the first three rules when you cannot identify a preferred suit on the basis that it is the longer, the higher or the stronger. With complex shaped hands you need to decide which rules take priority.

As we have seen a four-carder must have 3 HCP to be biddable. Most five carders are biddable. I’ve used an A-B notation for the bidding sequence.

You must show both strength and “shape” in as few bids as possible. Acol does this through setting the order in which you should bid your suits.

Normally when opening you would choose a major over a minor, a 5-carder over a 4-carder, and bid the stronger suit (with higher points) before the weaker one. If both are of equal length bid the higher-ranking suit over the lower ranking, and especially a major over a minor. But if the two suits are ♣s and ♠s, bid the ♣s first so you can continue to communicate at the lowest possible level.

Use your judgment and experience to make the most natural bid available. So let’s delve deeper into the science (tongue-in-cheek).