The overcall is a bid by the second player over an opening bid. 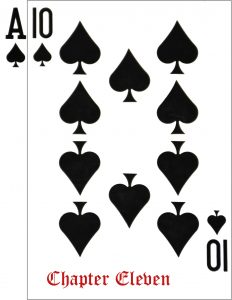 While it is an opportunity to give partner information about your own hand, it can also have nuisance value in interfering with the opposition’s communication. The intervention may encourage the opposition into bidding too high, for example, so they fail to make their contract. Sometimes the overcall leads to a losing “sacrifice contract” where you lose less points than if opposition succeeded in their contract.

This chapter covers the basics of overcalls. As for overcall conventions they are covered in Chapter Thirteen.

A suit overcall at the one level shows 8-15 points. It promises a 5-card suit with at least two honour cards. A simple overcall is one that is made at the next available level. It can be made on as little as 8 points. Below this overcaller would have to have a very good 6-carder, or longer.

East overcalls with a 1♥ intervention showing five card hearts and 8-15 points. Note that he does not need such a good hand as if he were in the opening position, where one of a suit normally promises 13-19 points and a rebiddable suit. A nominal 10 points plus points for distribution will be enough on the basis that his partner will also have an average holding. This would especially be the case if opener’s partner passed after the overcall, showing less than 6 points—which in fact he does. Where South passes, the share of points will favour the overcaller because it suggests West has a better hand than average. East will work out West’s possible points based on his own hand and the way the bidding has progressed so far.

If South had responded, North would have been obliged to reply with his promised rebid. The intervention and partner’s pass lets him off the hook.

Again, if South had responded, followed by a pass from West the overcaller would be taken out of any doubtful contract because North is obliged to respond.

Either way the overcaller is safe. His call gives partner West a chance to bid. It also gives him valuable information in the event they become defenders. East is expressing interest in ♥s, and West will be sure to take the hint for a good opening lead should South become declarer.

If South bids and overcaller’s partner passes then it is a clear that North, as opener, has a stronger hand than basic opening points. As for East, he is out of his overcalled contract, safe in the knowledge that his partnership, East and West, had not missed a contract, and that at least his overcall has been informative.

In the next sequence North opens 1♠ showing 13-19 points and promising a rebid. East’s simple overcall at the two level shows 11-15 points and a 5-carder in hearts. He needs an extra three points to bid at the two-level.

West can raise with 3-card support and 6-9 points. With 4-card support he can double raise. East will rebid if he has 14-15 points, otherwise he will “pass”.

Jump overcall of a suit opener

A jump overcall shows 16+ points and a five-carder. With a 6-card suit the overcall could be made with as low as 12 points. A jump overcall is a bid of one more than necessary and shows strength. In the example below North opens 1♥, and East pounces with a 2♠ jump overcall indicating he has 16+ points:

Some modern players prefer the Double Overcall to show this kind of strength (16+ points) reserving the jump overcall of a suit to indicate a weak hand:

The weak jump overcall is for partnership agreement. Reserving the double overcall for strong hands, they may prefer an overcall, say 2♠ over an opening bid of 1♥, to show weakness rather than strength. The weak jump overcall shows 5-10 points and a six-carder. If at the three level it would indicate a seven-carder.

NT overcall of a suit opener

Acol players use a stronger No Trump point count when in the overcall position, even if they normally play the weak NT for opening bids. An overcall of 1NT over a one suit opener means a balanced hand with 15-17 points and a double stopper in opener’s suit.

Suit overcall of a NT opener

Any overcall of a No Trump opener will obviously have to be at the two level. When overcalling a No Trump bid overcaller therefore needs 15-17 points and a 6-carder or two 5-carders:

No trump overcall of a No Trump opener

The 2NT over a No Trump opener is the Acol 2NT Convention (further explained in Chapter Thirteen). It does not show a balanced hand, but an unbalanced strong two-suiter. It asks partner to bid his best suit. If he has two good suits then North should bid them in ascending order.

With a whopping 18 points and two 6-carders South is looking for a ♠/♦ fit. His overcall of 2NT is Game forcing.

Back to Top
To continue reading go to: Suit intervention
Further pages in this chapter are:
No trump intervention
Intervention over Astro