Against a two-opener partner must respond even with no points! No free pass! 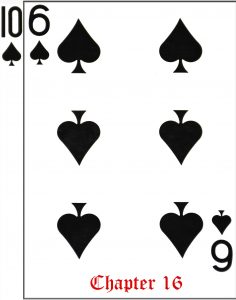 So responder has just three options:
1. Bid No trump
2. Raise partner’s suit
3. Bid a takeout in a new suit

The Acol Strong Two is just too good to open at the one level, but not good enough for a sledgehammer 2♣ opener. Do not count high card points. Instead count playing tricks. You need eight in all to bid: 2♠, 2♥ or 2♦. It shows a strong 5-carder, with a nominal 18-22 points– less, of course, if holding a longer suit.

The Acol Two is forcing for one round, and promises Game with minimum support, which South must not pass:

So how should South respond?

South has a measly 3 points and no support for the ♠ trump suit. The 2NT is the standard negative response and says nothing about distribution.

Again, showing low values; although South might agree 4♠s the second time around.

The Herbert Negative is the cheapest suit reply to any strong two opener and replaces the standard 2NT negative response , with the intention of keeping the bidding as low as possible by only bidding at the next suit up:

South is showing less than 7 points and no support for hearts. Similarly, in response to an opening bid of 2♦ the Herbert Negative response would be 2♥ (at the next suit up) to send the same message. The Herbert Negative allows more room for bidding and usually ensures that the stronger hand of the partnership remains hidden.

However, with 7+ points it does mean that Herbert Negative players have to bid at the three level to show a stronger hand. In the next example, responder has a hand worth 9 points. South has to jump shift to show a positive response:

Forcing to Game with a takeout

With just 5 points South does not command enough strength to bid at the three level. However, revealing his ♥s suggests a long suit with good points, inviting North to Game.

With 12 points South gets excited and responds with a jump takeout here, showing a good 6-carder in a suit that does not need partner’s support. North’s rebid adds to the euphoria showing a fit with South’s spades. South replies with 4NT asking for Aces under the Blackwood convention.

South’s 4♠ bid (a double raise) shows 9-10 points, and no first round controls. This hand can raise any suit (bar ♣s of course) to Game. Note, just J-x-x would be considered adequate trump support if the situation presented itself.

The 4NT rebid by North is, of course, Blackwood, signalled by the fact that trumps have been agreed. Note that in this case the double raise to Game automatically denies Aces, so the Blackwood 4NT asks right away for Kings.

Note that a single raise to 3♠s would show a stronger hand than the direct raise to Game, indicating 11+ points. It would also show first round controls (Aces). In this scenario North can still bid 4NT, this time asking for aces. The Blackwood convention is fully described in Chapter Seventeen: Blackwood.

Back to Top
To continue reading go to: Response to the Two Club Opener
Further pages in this chapter are:
Response to the Two No Trump opener
Conventions and the 2NT opener
By Nigel Benetton – based on the UK Acol Bridge Bidding System