Words confused in the English language abound. Closely-sounding words, or words with a subtle different spelling trip up even the most conscientious student. Sometimes the differences defy logic, which confounds memory and leads to repetitive error. What’s to be done? There is no easy way. We have to learn by rote, tiresome though that may be. Here’s a list to start with. 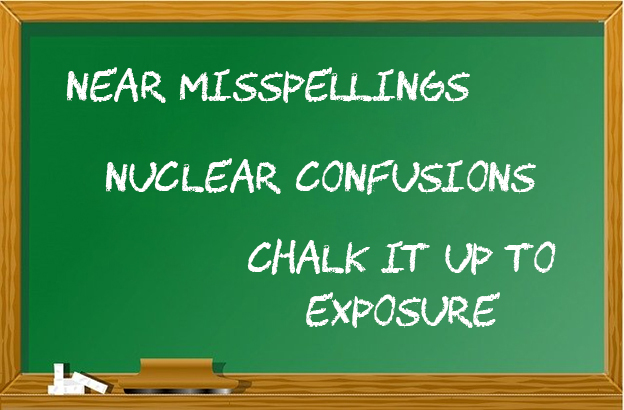 Abductor and Adductor (in muscles)

Abductor – any muscle that abducts; draws away from the axis of the body or limb. (Latin abducere to draw away)

Adductor – any muscle that adducts; draws toward the axis of the body or limb. (Latin adducer to bring into).

Aside from that, abduct, of course, means to carry off, to kidnap. Adduce means to bring forward, or to bring into evidence.

Accept (verb) – To take or receive something. “I will accept your offer on one condition.”

Except (preposition) – With the exclusion of; save; but. “Everyone except Andrew will have to help.”

However, do not confuse with “excerpt” (noun) – a passage or quotation taken from a book. (Latin excerpere to pick out).

Accessary (noun) – An accessary is a person who aids (as in committing a crime).

Accessory (noun) – An accessory is an attachment, or extra feature.

Aloud (adverb). “Say it aloud so that everyone can hear; do not talk softly.”

Allowed (verb). “We were not allowed to play outside; we’re not permitted.”

However, do not confuse either word with loud (adjective), in for example, describing a noise: “We were all startled by a loud noise in the yard.”

“Amount” should be used to refer to quantities that cannot be counted or cannot be expressed in terms of a single number.

On the other hand, “number” is used for quantities that can be counted.

Example: “A large number of deer ate the corn.”

“A large amount of/a great deal of” are used with uncountable nouns such as: water, money, time, etc.

The rule for collective nouns is this: use a singular verb when the group is considered as a unit acting together:

On the other hand, use a plural verb when the individual members of the group are acting separately. For example:

Among and amongst. The former is the earlier version and seems to be far more in use these days. Both mean the same thing: situated in the middle of a group of people or things (preposition).

Any more and Anymore

Aural – relating to ears or the sense of hearing.

Oral – spoken rather than written; relating to the mouth.

Beside means at the side of.

Besides means in addition to.

Breach: violation of the law; a gap made in a wall.

Breech: back of a gun barrel; the lower part of anything (eg the buttocks)

Break means to shatter; or (as a noun) an interval.

The Tropic of Cancer (or Northern Tropic) is the northernmost line of latitude when the sun is directly overhead on the June Solstice.

The Tropic of Capricorn (or Southern Tropic) is the southernmost line of latitude when the sun is directly overhead on the December Solstice.

The two demarcate the tropics. [To help remember, consider Cancer is above Capricorn in an A-Z list; thus north above south on the globe].

Canvass (verb) – to solicit for votes or an opinion; to discuss.

Course: a golf course, a racing course; a division between a meal.

Complement: to accompany, to go with; full quantity. [mnemonic: complEte]

Compliment: give praise, give approval. “Here is a gift with our compliments.” [mnemonic be nIce].

Council is an assembly; a committee that arranges business.

Counsel is a legal adviser (noun); or to give advice (verb).

A dependant (noun) is a person who relies on another: a child is a dependant of a parent.

Dependent (adjective) means depending on; determined or influenced by.

Due to and Owing to

The two are almost interchangeable with some dictionaries noting that, when used, egoist often means egotist.

An egoist believes he is better and more important than anyone else, though he may not say so. What you might consider a secretive conceit. He is a selfish person, very cunning.

On the other hand, an egotist only talks about himself and tries to steer all conversations to being all about him (certainly opposite to being secretive!). He is boastful and self-centred.

In most instances, however, the word “egotist” is preferred.

Note. Egoism (the opposite of altruism) relates to the habit of valuing everything from one’s own perspective. The view in ethics is that morality ultimately rests on self-interest.

Egotism, on the other hand, is excessive reference to oneself in conversation or writing. Boastfulness, selfishness, or excessive pride; an inflated sense of one’s own importance; being conceited or vain.

Elicit (verb) – to draw out; to produce a response or reaction.

Else. Else is often used redundantly in combination with prepositions such as but, except, or besides. For example: “No one else but Sam saw the accident.” Here you could omit the word “else” and it would still make sense.

When a pronoun is followed by else, the possessive form is generally written thus: Someone else’s (not someone’s else).

Both “who else’s” and “whose else” are in use, but not “whose else’s”. For example: “Who else’s book could it have been?” “Whose else feels that Gary should be allowed to join the team?”

Whose. It has sometimes been claimed that whose should be used only as the possessive form of who: He is a man whose power has greatly eroded. But there are also plenty of examples where the word whose is used as the possessive of which, as in: The play, whose style is rigidly formal, is typical of the period.

In the final analysis there seems little agreement on the correct grammatical use of whose in these various examples. This tends to happen when a language is evolving. When usage falls out of favour, die-hards trying to stick the “rules” end up sounding stilted.

Meanwhile, perhaps note that who’s is a contraction of the verb: who is?

To forgo is to do without or relinquish: “I will forgo the pleasure of your company.”

To forego, by contrast, is to go before, to precede. “Forego a partner in death.”

Formally means in a formal manner.

To be intrusive is to involve oneself in the affairs of others, generally in an objectionable manner, tactlessly but not necessarily in a way that calls attention to oneself.

To be obtrusive is to interfere without regard for propriety or subtlety.

The two words can apply to the same situation, but intrusive emphasises the effect on the recipient of the attention, while obtrusive focuses on how the attention is perceived from the outside.

“I do not want to lose my position.” (pronounced looz). To fail to keep, or win.

Marshal is an officer (noun); an official responsible for supervising public events (noun). To arrange in due order (verb).

Martial (adjective) – of war or the army, warlike

There are 100 centimetres in a metre (note: -re, the measurement).

Of (preposition) – indicates relationships between words:  “This book of short stories is great fun to read.”

Off (adverb or preposition) – indicates separation or disconnection: “Please switch the stove off.”

Peace (noun) – freedom from noise or anxiety; the end of war.

Piece (noun) – a portion separated from the whole. An item used in constructing something.

Proffer – to offer something for consideration; to hold out something to grasp.

Probably (adverb) – almost certainly. “He will probably help me.”

Properly (adverb) – in a proper way; completely. “Do your work properly, and I will consider a reward.”

Reign (verb) – to rule as a monarch; be the dominant quality or aspect.

Rein – (as a noun) a long, narrow strap attached to a horse’s bit; (as a verb) to keep under control.

[Not to be confused with rain!]

Resent – [hard] to feel indignantly aggrieved. (Latin Sentire meaning “to feel”; add re which acts as an intensive; resent is to feel strongly; also from Resentir (French “to be angry”)

Review is a survey, inspection.

Revue is a stage production.

Seeming is an adjective (it modifies a noun).

Seemingly is an adverb (it modifies an adjective or a verb).

Sew (verb) – to join or repair something by making stitches with a needle and thread.

Sow (verb) – to plant seed by scattering on the ground; to introduce something unwelcome.

Silicone is a synthetic resin made from silicon.

Stair (noun) – each of a set of fixed steps. “I went upstairs to bed”.

Stare (verb) – to look fixedly at someone.

A Stalactite comes down from the ceiling.

A Stalagmite comes up from the ground.

Stationary (adjective) – not moving, not changing in quantity or condition.

Straight – line without a curve or bend; honest and direct.

Taught (verb) – past tense of to teach.

Their, There, and They’re

Their (possessive) – belonging to or associated with. “We went to their house.”

There (adverb) – in, at or to that place or position. “Put the book over there.”

They’re – contraction of the verb they are. “They’re not in a position to refuse.”

Thorough – complete with regard to every detail; total, absolute. “We had a thorough spring clean yesterday.”

Through – from one side to the other; from beginning to end. “We went through the tunnel.”

Though and although are interchangeable in most situations, though the former is in more common usage these days. They mean despite the fact that; in spite of the fact that; however, but.

Though is only used with as and even however:

Furthermore, only though can be used as an adverb, where it means however, or nevertheless:

Although is preferred in a more formal setting, and often works better when introducing a sentence:

Urban (adjective) – relating to a town or city.

Waste – (As a verb) to squander, neglect or fail to use; to wear away; (as a noun) rubbish, barren land.

Waive – to refrain from claiming, to set aside, to forgo.

Wave – to move one’s hand to and fro in greeting, to direct, or as a signal; a ridge of water moving over the surface of a body of water; a swell, a surge; a mass of movement.

Who and Whom; Whomsoever and Whatever

You, Your, You’re and Yours

You (pronoun) – used to refer to the person or the people that the speaker is addressing. “I gave it to you.”

Your (possessive adjective) – belonging to or associated with the person that the speaker is addressing. “I want your book.” [your is the adjective describing book].

You’re (verb) – contraction of you are. “You’re not allowed to come.”

Yours (possessive pronoun) – used to refer to something belonging to or associated with the person or people that the speaker is addressing. “The book is yours.”