Conventions are important in any bridge bidding system. Even players learning the game soon come across the word “convention”. 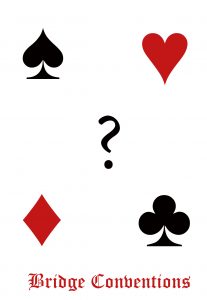 Agreed with partner they form a code to exchange information about card holdings without infringing the rules of bidding.

Few words are allowed in the bidding: the numbers one to seven, suit names, no trump, no bid, pass and double can be said, and little else.

There is, of course,  information behind natural bidding. Opening 1♥, for example, means I have 13-19 points and at least four hearts. If I bid them again then I have at least five hearts. Opening 1 no trump shows a balanced hand such as 4-3-3-3.

But once the bidding gets off the ground conventions soon come into play. In response to an opening bid of 1 no trump, a bid of 2♥s means 9-11 points and five cards in hearts. That’s natural. But what about 2♣s? Well, this is the Stayman convention and probably the most well-known of them all. Like many conventions you will come across, Stayman seeks to avoid playing a contract in no trumps. Responder is unbalanced and thinks the team should play with a suit as trumps. Remember, all he said was 2♣s, and yet these two words convey so much more. Responses to these conventional calls also convey coded information.

On the right of this page is a list of all the conventions referred to in this book, A Practical  Guide to Playing Bridge.

By Nigel Benetton – based on the UK Acol Bridge Bidding System
Last updated: Tuesday, 11th May 2021