The 4-suit is a strong pre-emptive opening bid with an 8-carder, showing a much higher point count than the 3-suit opener: 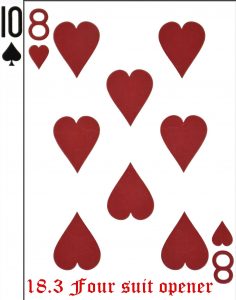 As with all these unusually shaped hands the longer the suit the lower the high card points needed. Again, as with the pre-emptive three bid it is better to value your holdings on the basis of playing tricks. In each of these cases you need 7 playing tricks (8 playing tricks if vulnerable).

In deciding whether to open three or four of a suit consider your playing tricks. Experts suggest you count your Playing Tricks and add 3 if not vulnerable and 2 if you are vulnerable. This gives you the total number of tricks you can expect to make and you bid accordingly. This is how the advice works in practice. Supposing your side is not vulnerable and your hand has six Playing Tricks, added to 3 for not vulnerable gives you nine altogether. A bid of 3 promises nine tricks. Here are some examples:

In this case North has 11 points and 8 playing tricks and he is going to open at the four-level:

In the next hand North has 5 points and a 9-carder, and also opens 4♦.

If the holding had been in a major, North would have opened at the 3-level. In the majors the bid shows a maximum of two honour tricks, and is, of course, a shutout bid at Game level.

South holds 10 points and an 8-carder. Having faced a partner who has already passed he opens 4♠. Had North not yet bid, South would have opened with a 2♠ bid instead, leaving him a round of bidding space.

Finally, with the following hand South can open 4♥. He has 11 points and an 8-card heart suit:

North must not go for a slam try with less than two aces. He will likely pass.

The 4NT opener is conventional showing a very strong unbalanced hand and is asking partner to indicate the number of aces he holds. North has 23 points and a seven-carder in spades.

South must reply. He has the following options:


Back to Top
To continue reading go to: The 5 suit opener