As the highest one level bid the 1NT overcall is very inconvenient. And such intervening bids also cancel out quantified bidding.

In this next sequence East’s 1NT intervention means he has 15-17 points, a balanced hand and a stop in North’s ♥s. 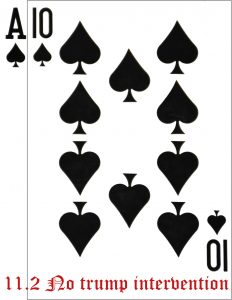 So what should South do? With a good spade suit and support for ♥s he might have planned to bid 1♠. But now he can’t do this over the 1NT intervention.

Besides, the bidders, North and East, have so far accounted for a minimum of 28 of the available points (North’s opening one of a suit promises 13-19 points and East’s overcall of 1NT promises 15-17 points). So South and West cannot have more than 12 points between them. With less than 6 points South will not bid:

But with higher values, South should bid as follows:

If vulnerable South is likely to pass as he needs at least 11 points for his double bid. This is because he stands to lose more points when vulnerable, so he needs the stronger hand to back his call.

In the next example, South’s 2NT overcall over East’s 1NT opening bid would normally mean 16+ points. But since North has already opened one of a suit, the response overcall can be made with less points, in the 10-12 range. However, South must still hold a balanced hand:

In the case of no trump replies to an opening bid of 1NT, the quantitative responses have to be modified if there has been an intervention. With no intervention South promises a balanced hand and the normal point range:

But with the intervention, South needs to adjust his values (and show a stopper in the intervening suit bid):

Back to Top
To continue reading go to: Intervention over Astro

By Nigel Benetton – based on the UK Acol Bridge Bidding System
Last updated: Wednesday, 12th May 2021