Basic options in play are: 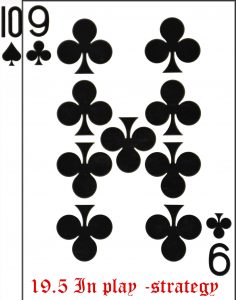 As declarer it might be useful to bear in mind the probabilities of card distribution between opponents’ hands. The chances have been worked out mathematically. For example, supposing you are considering a spade lead. You hold the following spades in your hand and dummy:

The opposition therefore holds six spades between them. What are the chances of the splits? With six cards the split probabilities are as follows:

In other words you have a 48% chance of running two rounds of spades with opposition following suit. A full mathematical analysis indicates that when more than two cards are held by the opposition in a given suit an odd number tends to break evenly, and an even number tends to break unevenly. So, as in the above, the even number (six) has the greatest chance of breaking unevenly (4-2). This rule holds true for all splits.

The probabilities of card distribution are useful when figuring your chances of a successful finesse. Where you want to try and finesse in a given suit, consider the number and distribution of cards held by the opposition:

Of course, probability of distribution is also important when considering when to draw trumps. Incidentally, it is poor play strategy to finesse partner’s lead.

What card to play

This is an old and well-trusted principle, and a rule that should rarely be broken. Following the lead to a trick the second in hand plays or discards a low card. This gives partner (being fourth in hand) the opportunity to win the trick with his lowest card, if possible. Suppose a ♠4 is lead from the dummy and you hold ♠Q 7 6. Do not play the Queen, but a low card, the ♠6. Declarer will play a high card. If he takes it with the ace your queen is still good. But suppose your partner has the ♠A. Playing your queen would have been a waste anyway. Declarer plays his ♠K, your partner wins the trick with the ace, and will surely lead through dummy for you to take the next trick with the ♠Q.

Sometimes you may have to break the rule, especially if you are left of declarer who has led to dummy’s queen. If you hold the king but play a low card, dummy could win the trick with the queen, especially if declarer holds the ace. Better to play the king and take the trick while you still can.

More often than not you should return partner’s suit, especially if he has played an encouraging 6 or 7, say. When left of declarer leads to the first trick he will be guided by the bidding. He could lead through dummy’s suit or to your strong suit if either were mentioned. But with a good suit of his own he will likely signal that first.

When you return partner’s lead it is a good idea to lead the original “fourth” highest with four or more cards. If you have a doubleton lead high-low.

One option is to lead through strength. This would be in a suit mentioned by second in hand during the auction. It makes the opposition decide whether to play a high or a low card. In any event it will give your partner the opportunity to take the trick. If right of dummy then you can opt to lead through the strong suit on the table.

Another option is to lead towards weakness. For example, if you have the next lead left of declarer (who will play the fourth card), lead out to his weakest suit, usually one he never mentioned in the auction.

Normally you cover an honour with an honour. Simply put, if dummy leads to the trick with ♥J and you hold ♥ Q 7 5, cover it with your ♥Q — one occasion where you break the rule of second player plays low.

However, if dummy leads from touching honours, say the ♠J from a holding of ♠ J 10 7, you should not cover it. Doing so could promote the 10 as a master.

Nor is it always correct to cover an honour with an honour if you promote a card in declarer’s hand. It is a matter for judgment and figuring out where the balance of cards lie.

If you have two honours of the suit led you should always cover. Supposing dummy leads with the 10 from a holding of ♦ 10 8 6, and you are holding ♦ K J 5. You should play your highest card.

Back to Top
To continue reading go to: Discarding
By Nigel Benetton – based on the UK Acol Bridge Bidding System