West deals to the next round and opens the bidding with 1♠. 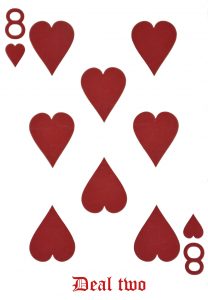 North overcalls with a bid of 1NT. This is supposed to mean three things: a guard in ♠s; a balanced hand; and 15-16 points. Remember this is not the normal Acol weak no trump opener showing 12-14 points. Even for players who play the weak NT, he needs 16+ points in the overcall position. But as we shall see North gets himself into trouble by misleading his partner!

East no bids, indicating he has less than 6 points.

South looks at this hand:

He has a nice balanced hand (nothing worse than a doubleton) and 11 points. It is ideal for a raise to 2NT (requiring 11-12 points). But remember, in the overcall position North has 16+ points. With South’s 11 they have more than enough for Game. He jumps to 3NT as a sign off.

North is declarer with a contract of 3NT. Left of declarer (East) leads to the first trick, ♠A, the suit in which West expressed an interest by his opening bid.

South places his hand on the table as dummy. North now looks at his hand and counts his tricks. He should quickly realise that he is in trouble.

To begin with North is short of his promised 16+ points. He must have forgotten the rule for the overcall position! He has 12 points. He also does not have a sufficient guard in ♠s. With the ♠Q North needs both a Jack and 10 in support. He only has a 10.

What happens next is painful and a little embarrassing.

East leads back a ♠ again and, predictably, West runs his suit. He first plays his ♠K taking out North’s Queen. North’s ♠10 had already fallen on the first trick, so he has no choice. West then wins the next three tricks, leading out the 9, 6 and finally 5 of his ♠ suit. West finishes off his assault by leading the ♥A to bring the opposition haul to 6 tricks. North is already down two tricks on his contract and he hasn’t even had  a look in. He overbid his hand and forgot the stopper rule.

West leads his ♥Q finally letting North in with his ♥K. North wins the next two tricks with his ♣A and ♣K leads. Lucky for him South kept his promise with a balanced hand. He has four clubs. North can now take two more tricks leading to dummy’s protected ♣Q and ♣J. North then takes the next trick with his dummy’s ♦A. But he can do nothing about West’s ♦K losing his ♦Q lead. The result is East-West garner seven tricks, making North suffer three undertricks.

It is going to hurt because North-South are now “vulnerable” having already made one Game. The partnership is very lucky West did not double. As it is the opposition earns 300 points above the line in penalties.

What a disaster! This demonstrates how dangerous it is in a No Trump contract to lose control of a suit. North promised a guard in ♠s, which he clearly did not have. And in the overcall position he was short on points. In different circumstances North might have been able to squirm out of censure by claiming he made a “sacrifice” bid. But this won’t wash here. The East-West partnership only has a combined point count of 17 and there is no way they have been denied a win.