Partner’s opening bid of one of a suit promises a rebid. He has a minimum of 13 high card points and a minimum of four cards in the named suit. We will know more about distribution on his rebid, and whether he has more than 13 points. 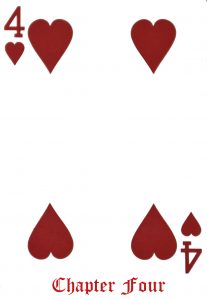 For now, in response to a one suit opener responder has four options:

With 0-5 points: that’s easy, No Bid. But with 6 or more points partner must respond.

So how far should you go in the bidding? Here is a rough guide for responding to one of a suit:

Opener has initially committed himself to 13 points. If partner also has 13 points then you can see this combined 26 is enough for Game in a major suit. Refer to the table on combined points in Chapter Three. Combined points. So with 13-15 responder should insist on Game either direct or later. As an example, with no other biddable suit and good four or five card support and 14 points responder might well raise opener’s 1♥ bid to 4♥s—direct to Game.

In any event, do not pass with 6+ points because partner may have 19 points (the maximum for a 1-suit opener) and miss Game.

Aside from this, now is the time to give partner as much information as possible, including suit preference, if any, and point count. The partnership is looking for a good fit and to determine the combined points. First add your partner’s promise of a minimum of 13 points to your own hand count and this will give you a rough idea where the bidding should stop. If, say, you have 9 points your combined count is 21, not enough for Game. So caution required! Bid only once unless opener replies to indicate higher values.

With less than 16 points and no biddable suit of his own partner’s reply will constitute a limit bid, either by raising opener’s suit, or responding in NT, a sign off.

With points sufficient to reply (6+), partner will first see if he has four card trump support for opener’s suit. With 6-9 points and four card support you can raise partner’s bid. This is a limit bid telling partner you have nothing more to say. It at least shows the partnership has the balance of power in that suit. A response of 2♥s over a 1♥ opening, for example, shows you also have four hearts and no other biddable suit. A response of a minor suit such as, 2♦ s in response to a 1♦ opener usually denies a biddable major suit. Any raise (or takeout – see below) indicates an unbalanced hand. A response in NT would show a balanced hand.


The long suit count, of course, is not used when raising partner.

Some authorities suggest using the above shortage count only when a 4-4 fit is in doubt, that if a 4-4 fit is a certainty the point scale can be upped: 5 for a void, 3 for a singleton and 1 for a doubleton. But not me. I stick to the table!

With higher values and no alternative biddable suit, you can raise opener’s bid as per the table in the next section, which provides a few examples of your options.