The takeout double in the overcall position over a suit opener shows interest in the other three suits, and good support for any unbid major. 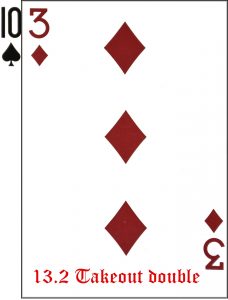 It essentially asks partner to make a choice.

This is an ideal double takeout over a 1♠ opener. East has 13 points (within the required range), support for the unbid major and he is able to accommodate any suit bid by West.

Essentially it tells partner, ‘I have enough points to open at the one level (13-19), but I can’t bid in the overcall position’. It shows strength in the other three suits, not mentioned by opener. It is a ‘forcing bid’ if the third player (South) no bids. If he has a stronger hand (16+ points) he will rebid. This will be encouraging but not forcing. Below 16 points he will likely not rebid.

North opens 1♠ to show a hand with at least four spades and 13-19 points. He probably has an unbalanced hand. East invokes the takeout double to show the same point range and that he has interest in the other three suits. West happens to have five hearts and four diamonds. He correctly replies with a bid of 2♥s. North’s follow up bid shows five spades and at least 3 high card points in that suit. East raises partner to show he holds four or more hearts and that he has at least 16 points. If West has 10 points they have the combined 26 points needed for Game. In any event they have nine hearts.

In overcalling one of a suit, the double overcall shows 13-19 points and a shortage in the overcalled suit. In the following sequence East’s double indicates he barely has a doubleton in ♥s:

In the next example, North opens with 1NT indicating a balanced hand and 12-14 points. The double overcall in this case tells partner East is better than opener’s maximum, i.e. he has 16+ points, and likewise a balanced hand:

In each case the double call shows East has more points than the opposition’s maximum. The response by West to a double overcall is as follows:

In the next example, East has 15+ points and a balanced hand. West bids 2♠ to show a 6-carder.

On East’s rebid, and also with a 6-carder in West’s ♠s, he would jump to Game in that suit. However, if his 6-carder was ♥s East might still invite Game by bidding 3♥s.  West would raise to 4♥ with 10 points or more (as in the next sequence). On 6 points he should pass.

With the suits reversed, the situation is more clear cut, as in the next sequence.

East jump shifts to a new suit, 3♠ to show he has a 6-carder in ♠s. West can go to Game on as little as 6 points. Note that in each case above, East’s rebid in a new suit would show a doubleton in West’s suit. That is, he would have agreed a suit on a 3-carder.

Back to Top
To continue reading go to: Acol 2NT convention
By Nigel Benetton – based on the UK Acol Bridge Bidding System