To me the 3NT contract is the biggest prize. 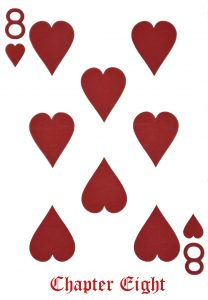 If you get a fit with partner for this you are in for an easy 100 points below the line for Game. Both partners need a balanced hand for this contract, and nothing worse than a doubleton. A singleton is dangerous though I dare say I have seen a few No Trump contracts made with one of the hands sitting with a singleton. Just how tricky this can be I have thrown caution to the winds in deal two in this chapter.

There are three deals to look at. We start with a straight up and down match to lay down the principles. Then work our way through a disaster in deal two and finally transfer of a No Trump attempt into a suit contract in deal three.

In the first deal you will see how South makes an easy 3NT contract to win Game earning 100 points below the line.

In the second deal the North-South team make a complete hash of it and fail in their 3NT contract. They suffer three undertricks. Because they are vulnerable they lose 100 points per undertrick, giving the opposition 300 points above the line. Note that only scores below the line count towards Game. The term ‘vulnerable’ is a form of handicap given to a team one Game up, so they face stiffer penalties if they lose the next round.

Deal three demonstrates the importance of escaping the no trump contract where the partnership holds an unbalanced hand and does not have stoppers in all the suits. The North-South team play a suit contract to win the third game and score 120 points for Game.

The score card shows the following:

1] North-South win the first round for Game in a 3NT contract. They earn 100 points below the line.

2] North-South lose the next round with three undertricks. As they won the first game they are vulnerable. The opposition earn a 300-point penalty above the line.

3] North-South win the third round for Game in their 4♥ contract. They earn 120 points below the line.

With two Games to their name North-South win the Rubber. They earn 700 points below the line for winning two Games to nil.

Rubber. A Rubber is a set of two or three Games. Whichever side wins two of them wins the Rubber.

Vulnerable. Once a side has won a Game they become “vulnerable”, and penalties for failing the contract are doubled. If both sides have won a game they are both termed vulnerable.

To continue reading go to: Deal one

Further pages in this chapter are:
Deal two
Deal three