The response to an overcall depends very much on the intervening bid. 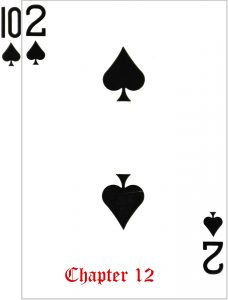 With less than 10 points the overcall is likely to be greeted with “no bid”, especially if there have been three bids so far. For example with this simple sequence:

For South it is fairly straightforward. North’s opening 1♥ shows at least a five-carder and 13-19 points and promising a rebid. Had he opened 1NT then again the message is clear: a balanced hand with 12-14 points and no promise of a rebid.

But the overcall is another matter altogether. East’s 1♠ promises a five-carder and 8-11 points.

Why not 13+ points? I hear you cry. Overcaller can afford to be more competitive because North has to rebid. In other words, East gets a free lunch. He interferes with opponent’s bidding—a good tactic—and provides a suggested lead to his partner.

So West has now heard three bids. He has a lot more to think about. In the above sequence he would have to bid at the two level or even three level to communicate. Does he agree East’s spades? If clubs is his suit he would have to bid 3♣s, which could put him out on a limb.

His decision depends on:
1. The opening bid
2. The overcall
3. Any intervening bid, and
4. What sort of hand he has

The overcall and the response to an overcall is a complex area of bridge. Responding to overcalls is not so straightforward. Experts in the overcall position certainly bend the rules when attempting to thwart opponents’ search for a suitable contract. They will invariably stretch a point or two. As for responder to the overcall he will put aside caution to some degree to oblige partner wherever possible. The upshot is that a clear framework for this tricky area of bridge is by definition somewhat elusive.

But there are some basic principles, you will be pleased to know. In reply to an overcall by partner consider your response in the following order of priority.

The most important thing to remember is to support your partner, even with minimum points. So with three-card support, look no further. A raise of your partner’s suit is your easiest option, and probably the course to take in 90% of cases.

With less than three-card support and a very weak hand all West can do is no bid. Only launch a takeout if you are sitting with at least a new six-card offering. With a stronger hand and good points you may be able to sneak a takeout with a new five-carder.

So considering the above sequence what does West do? Both sides are not vulnerable, that is, neither side has yet made a Game.

He has four points and three-card support for partner. Bid 2♠s. (South’s 2♦ intervention, by the way, has no effect on the meaning of West’s response).

It is rare for overcaller to end up with a contract. That is invariably the privilege of the opening bidder, in this case North. Of course, it means South will be dummy. Following the lead to the first trick his hand is placed face up on the table. East will certainly be able to work out how many spades North has. This demonstrates the informative value of the response to the overcall.

It is also important to keep in mind that response to the overcall is not the same as the response to an opening bid.

If East had made the opening bid at 1♠, what should West’s response be? He only has 4 points, and only three spades. To raise partner, remember he needs 6-9 points and four-card support. In such a scenario he would, of course, no bid.
In the next example, after the same bidding sequence, West again has four points—not uncommon when three players have already contributed to the bidding.

With only a singleton in partner’s suit and no six carder his only option is to no bid. The five-card minor is too weak to signal a holding. If instead his clubs were a six-carder headed by the Queen a 2♣ response would be doable.

The table summarises the simplest set of scenarios where there is no intervention. These are the candidate bids open to West:

In other words West has five choices. In each case he will first look for three-card support for partner. Failing that he will see if he can respond with a takeout should he have a suitable six-card major.

Finally, to emphasise, high card points are important but without a fit they are of limited value. Strength rather comes from length and the degree of support for partner’s hand.

Back to Top
To continue reading go to: Response to a suit overcall
Further pages in this chapter are:
Response to a 1NT overcall
Intervention and distribution
Overcall response revisited