In response to the 2NT opener there are three useful conventions: Baron, Flint and Gerber. 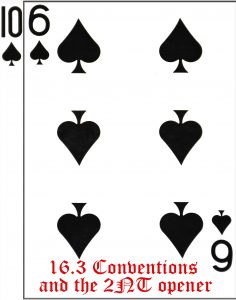 A 3♣ response to a 2NT opener is Baron. It shows an unbalanced hand with 6-12 points and typically 5-4 in shape. It asks opener for any unbid 4-carder. In the event of a choice he should show his lower ranking suit first. The bidding continues in ascending order until a fit is found, otherwise the partnership settles for 3NT. The convention is forcing to Game, but with slam as an enquiry.

The bid is to find a 4-4 fit with slam possibilities, and usually makes opener declarer so his strength remains hidden. The Baron hand is typically 5-4 in two suits with a point spread of around 6-12 plus distribution. Baron may also be used facing a 2NT quantitative rebid by a 2♣ opener. Accordingly this reduces the requirements for the Baron hand to the 4-9 point range.

South invokes Baron to show at least 5-4 in majors and more than 5 points. He asks North to bid any four-carder he holds, starting with the lowest ranking. South has hit pay-dirt because his partner holds four spades so they have a combined nine cards in that suit. They have a minimum combined 29 points, not enough for slam. South’s 4♠ is a sign off at Game.

A 3♦ response to the 2NT opener is Flint intended to ensure the partnership remains safely below Game in a suit contract. It shows a 6-carder or possibly a 5-carder and 3-4 points. This convention is used to request partner to transfer to 3♥s. Responder will then either pass after 3♥s from opener, or bid his own suit (3♠, 4♣ or 4♦), which opener will pass, thus stopping below Game. Responder’s points are 3-4 and the intention is to stop below Game and avoid a misfit in No Trumps. Note that the 3♦ call may be used in response to the 2NT quantitative rebid by a 2♣ opener. 3♥ says, “I have nothing but a long weak suit.” The bidding continues until the suit is disclosed.

South has a long major and less than 5 points. His 3♦ Flint is requesting opener to bid 3♥. South will leave this reply if ♥ was his major or, in this case, he can switch to ♠s at the same level, bidding 3♠. North will pass to stay below Game as agreed.

North opens 2NT to show a balanced hand in the 20-22 point range. South’s hand is as in the first example. North has obeyed the transfer to 3♥ even though he is 4-3 in ♠s and ♥s. Happily South bids 3♠ to show this was his preferred major. North decides to raise to Game because he has 4♠s and is on the maximum 22 points.

There are only two cases where opener will refuse to accept the transfer into ♥s. In this first example, North is on maximum point count of 22, and has a forcing ♥ suit. His bid of 3♠ is a precise indication that he has a good fit in ♥s for Game. North’s bid shows strength and says nothing about his ♠ suit, which, by inference, is probably a doubleton. South, with long weak ♠s would pass, so that at worst they would have six spades between them with outside strength. With a fit South would go straight to 4♥s.

In this second type of refusal, North, again with maximum points, has both majors under his wing. His bid of 3NT invites South to make a choice between the two majors at Game level. However, with the same hands consider this alternative sequence:

Here North’s 3♥ rebid instead of 3NT may be tactically better because it will make him declarer 50% of the time and therefore keep his strength hidden.  If South’s suit is ♥s, he will pass—otherwise he bids 3♠s. North can then go to Game. The disadvantage with this sequence is that North cannot go to Game over South’s pass. If North knew what South was going to do he would have bid 3NT, leaving South to take the partnership to Game in a major.

Here South’s rebid of 3NT shows that his first response was a genuine 3♦ bid. It had in fact been natural (as would also have been the case if his second response had been 4♣ or 4♦ instead of 3NT). These bids (3NT or 4 of a minor) deny a long major and suggest slam if North is on maximum. South’s hand is not quite strong enough for a quantitative 4NT bid, or a Gerber 4♣ in response to opener’s 2NT. In other words, he has less than 11 points.

Gerber is an immediate response of 4♣ to a 1NT or 2NT opening, asking for aces. Since it is a slam investigation combined points need to be around 33 points for the partnership to bid up to that level. The opening bid of 1NT shows 12-14 points (the weak no trump) so would rely on responder for the bulk of the power. On the other hand an opening bid of 2NT shows 20-22 points and responder needs a lot less points to invoke Gerber.

Either way, North is showing a balanced hand and is not promising a rebid. Gerber changes that.

As a rough guide South would need an 8-card major at the lower end of the point range, down to a 6-card minor at the upper level of the points range.

The replies to Gerber are based on the Blackwood principal though at a lower level. In response north will bid as follows:

South will now reassess the situation and respond accordingly.

This is further discussed in Chapter Seventeen: Other conventions.