With 10 or more points responder will seek to keep the bidding open and ensure the correct fit. 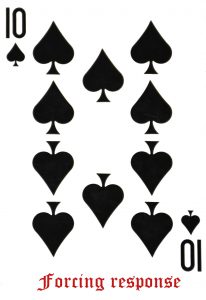 With certain hands he will even force the issue.

When South responds certain of his bids are “forcing for one round”. This means that his partner, North, is forced to rebid. This keeps the bidding open for one more round. South does not promise a rebid. His force, instead of a pass, prevents a situation where three passes would close off the auction. The following sequences are examples of one-round forces, the first bid by North, the force response by South:

The fourth suit force does not show a good holding in the suit mentioned (♦s in the sequence below).

North opens 1♥, and South bids a new suit at the one level, which shows 6-15 points. North also bids a new suit on the rebid (2♣). The fourth suit (♦s) on second response by South indicates Game going. South needs 10-11 points for the fourth suit forcing call. Essentially he bids two of any suit left, and then will support partner on his rebid to Game.

South again bids the fourth suit to show a partial guard in ♥s. He asks North to go to 3NT if he also has a mild guard in ♥s.

Fourth suit forcing by South indicates a Game-going hand with, say, 14 points; but shows uncertainty of where to go. It does not usually promise a rebid and leaves it to partner to select Game contract. Fourth suit bid at the three level does promise a rebid, however. Neither bid, a fourth suit at the 2- or 3-level is Game forcing. It is used, more or less, as an extension of the Directional Asking Bids. It is unconditionally forcing—but to what level depends on the level of the fourth suit itself. It hopes to reach Game contract.

Well bid the suit left, 3♦, even if you only have three cards in that suit. You are showing 10-11 points and you are looking for a Game fit.

Back to Top
To continue reading go to: Wolff